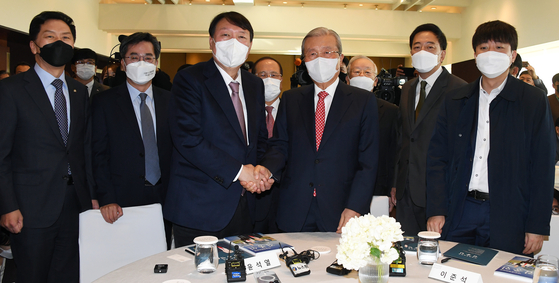 “I think it is time for Dr. Kim to take on a role at this time when not only political reform, but also a wholesale reorganization of the state, is needed,” Yoon said of the former PPP leader and economist at a ceremony for the publication of Kim’s latest book, held at a hotel in Yongsan District, central Seoul, on Monday.

“Dr. Kim is someone that political parties, regardless of their ideological orientation, have relied on to get themselves back on track when they veered off course,” Yoon added, describing Kim as a “firefighter” for parties mired in political difficulty.

Unusual among well-known political figures, Kim has served as both the leader of the current ruling Democratic Party (DP) and the main opposition party. His stint as the DP’s interim chairman from January to August 2016 took place when the party was in opposition to the ruling conservative government of then-President Park Geun-hye.

In voicing his admiration of Kim, Yoon also signaled his alignment with the former PPP leader’s perceived lack of partisan allegiance. “Dr. Kim is not someone who is trapped in any particular ideological or partisan paradigm. He is someone armed with a practical ideology who thinks of the people.

“When I look at his life trajectory, it is clear that he is not one side or another, but is only concerned with people’s livelihoods and the country’s prosperity.”

Since formally entering the political fray, first as a contender for the PPP’s presidential ticket and now as the party’s candidate in the March presidential election, Yoon has stressed his refusal to be bound by the main opposition party’s ideology or leadership.

A common refrain Yoon employed in response to speculation in the spring and early summer from reporters about his yet-unannounced entry into the PPP, which eventually took place at the end of July, was that people should “watch the path he is walking.”

The former prosecutor general has shown little appetite for party loyalty, and that inclination led him to butt heads with the PPP’s new leader, Lee Jun-seok, as Yoon publicly wavered over joining the party.

Yoon built his public reputation as a state prosecutor by conducting investigations into allegations that the National Intelligence Agency ran a covert operation to influence public opinion through online comments ahead of the December 2012 presidential election in favor of then-ruling party candidate Park Geun-hye.

The investigation, which began after Park took power, raised the ire of her administration and resulted in his demotion, which Yoon later exposed as the result of political pressure.

At the time of that explosive revelation, Yoon famously said, "I do not show allegiance to people."

After Park was impeached and President Moon Jae-in took power in May 2017, Moon selected Yoon first as chief of the prestigious Seoul Central District Prosecutors' Office and then as prosecutor general in July 2019.

Yoon lived up to his words when he later launched a corruption investigation into Cho Kuk, a close aide of Moon and the president's nominee for the post of justice minister.

Yoon's investigation led to Cho's quick resignation after he was appointed. Relations between Yoon and the ruling government and party broke down completely after Moon’s next justice minister, Choo Mi-ae, led an effort to suspend him from his post for his defiance of the government's plan to defang the prosecution's investigative powers.

Although the suspension was later lifted by court injunction, Yoon resigned from his post in March with four months left in his two-year tenure after the government announced another plan to strip the state prosecution service of yet more powers.

Time for a vision (KOR)