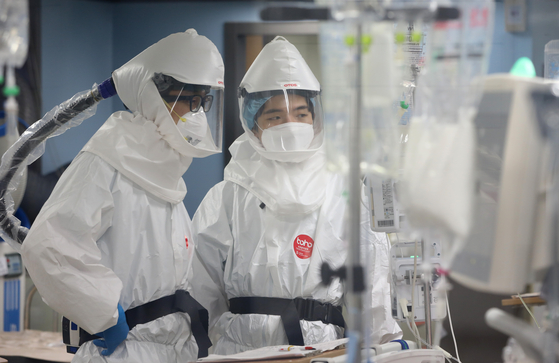 
Some critically ill Covid-19 patients from the capital area will be transferred to other parts of the country, the government said, as more than three out of four intensive care unit (I.C.U.) beds in the metropolitan region were occupied.

According to the latest government data, Seoul had 78.6 percent of its I.C.U. beds full as of 5 p.m. Sunday, closely followed by Incheon with 78.5 percent and Gyeonggi with 73 percent.

With beds in Seoul and Incheon rapidly filling up, the I.C.U. occupancy rate for the Seoul metropolitan area as a whole also shot up to 76.4 percent, with 525 out of 687 beds occupied. Compared to last week's average, it rose by 10.2 percentage points.

This occupancy surpasses the 75 percent threshold, which the government proposed as a standard for implementing its emergency plans.

“The infectious disease hospital bed and intensive care bed situations in the Seoul metropolitan area are on thin ice,” Health Minister Kwon Deok-cheol said while presiding over a virus response meeting on Monday. “Nursing and psychiatric hospitals and related facilities are having trouble allocating their beds, and medical staff and quarantine personnel who have been fighting [against the pandemic] for more than a year are now at their limit.”

During a news briefing on Monday, Lee Chang-joon, head of the hospital bed management at the Central Disaster Management Headquarters, also said the government is looking at the situation “stringently.”

The government recently issued an urgent administrative order to secure more hospital beds in general hospitals in the greater capital area. But as it takes weeks for the administrative order to come into effect, the government is streamlining the patient transfer system between the capital area and other parts of the country, and between I.C.U.s and intermediate care units.

The government’s plan is to speed up the turnover rate of I.C.U.s in large hospitals by implementing a “Step-Down” strategy, or quickly moving critically ill patients to other hospitals or units when their condition improves.

He continued, “Covid-19 designated hospitals also play an important role in the non-metropolitan region as they can treat both patients in critical condition as well as those at intermediate risk. We will designate new Covid-19 hospitals in regions where there are none, like in North Jeolla, and we will newly designate three more in the capital area.”

Although the capital region’s I.C.U. occupancy rate already passed the limit, officials remained prudent on implementing the emergency plan, saying they are “considering various indicators” for the activation. The government is set to reveal new criteria to evaluate the virus situation, including a specific guideline of when to initiate a so-called circuit breaker, or hold the recent distancing relaxations and reintroduce the restrictions, on Tuesday.

Twelve more people died from the virus, bringing the death toll to 3,115.

“The main causes [for the latest jump in virus transmissions] are the increase in indoor activities coupled with the cold weather, the increase of breakthrough infections among the elderly, as well as the remaining 10 million people who haven’t been vaccinated, including children and adolescents, and the waned vigilance against the virus,” the health minister said.

The government said it will strengthen the compensation for participants in clinical trials of domestic vaccines in a bid to promote the development of domestic Covid-19 vaccines and treatments.

The new compensations say that people who participate in Phase 3 clinical trials will get a proof of vaccination, and those who take part in the Phase 1 and 2 trials will get exempted from the “vaccine pass” system.