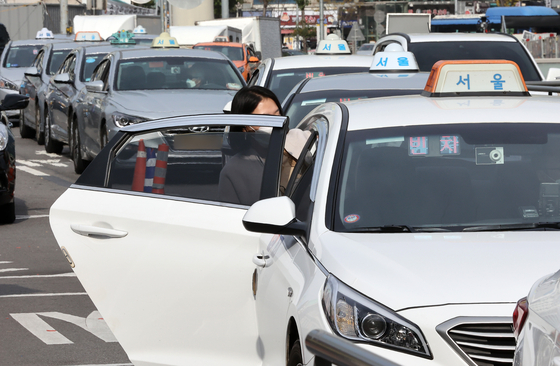 A woman rides a taxi near Seoul Station in central Seoul on Monday. [NEWS1]


After a surge in demand for late-night taxis following the gradual return to normalcy, the city of Seoul will temporarily lift night-time operation restrictions for privately-owned taxis starting Tuesday.

The Seoul Metropolitan Government announced Monday that it will temporary lift the three-shift system at nighttime, which will go into effect from Tuesday until Jan. 1.

Under the three-shift system, private cabs in Seoul had to take every third day off, while the new policy will allow private cabs to operate from 9 a.m. to 4 a.m. even on their off-days.

The announcement came as demand for taxi services during late-night hours, from 11 p.m. to 4 a.m. the next day, just about doubled after the government implemented its “With Corona” policies on Nov. 1, the city government said.

The average number of taxis operating during those hours has already increased 75.5 percent from 16,510 rides in October to 28,972 rides in the first week of November.

The capital city saw a drop in the number of cabs available at night in the two years since the pandemic began.

As of this month, 16,519 taxis are running during late-night hours, which is up 36.9 percent compared to October. But it was 5,551 fewer taxis compared to pre-pandemic levels in 2019, mainly due to a decrease in corporate-owned taxis.

The city believes about 2,000 more cabs will become available for nighttime services with its lifting of restrictions.

The city threatened administrative action against private cabbies who do not follow the rules, and run a special team to crack down on drivers who refuse passengers because of where they want to go.

Seoul City will also expand “night owl” bus services in December to make up for unfulfilled demand for taxis. Thirteen more buses will be added to eight routes, and three new routes will temporarily operate that go via Itaewon and Gangnam stations.

“We will work to ensure that the measures to resolve late-night rides will go beyond serving as a stopgap,” said Baek Ho, head of the department of city traffic at Seoul City Hall.

‘With Corona’ put on hold