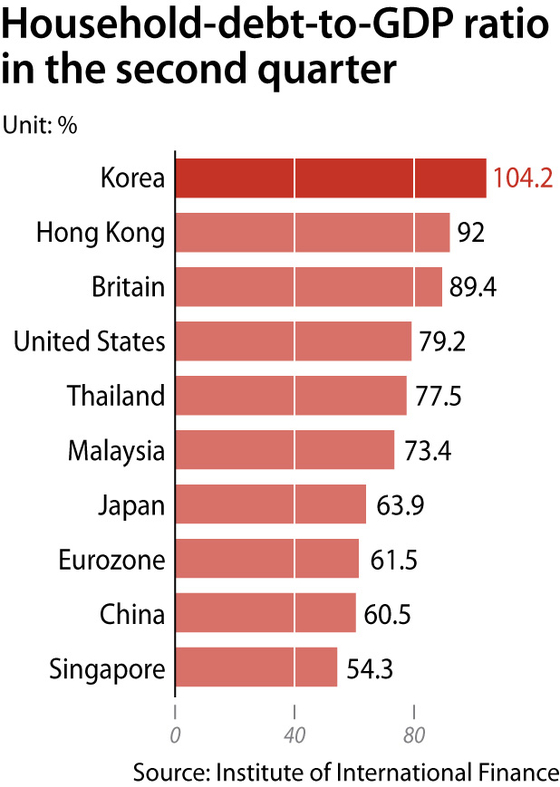 Koreans are the most leveraged people in the world, at least if countries with bigger debt problems are ignored.

In the Global Debt Monitor, released Monday by Washington-based Institute of International Finance (IIF), Korea was again at the top of the list, with the household-debt-to-GDP ratio at 104.2 percent in the second quarter.

The speed of debt growth in Korea was the fastest. It second quarter debt-to-GDP ratio is 6 percentage points higher than the 98.2 percent in the second quarter of 2020.

The list does not necessarily give an accurate sense of where Korea lies on the spectrum of indebtedness. Due to the way the list is arranged, some of the most indebted countries in the world are left off, such as Australia, the Netherlands, Denmark, Switzerland and Norway.

By some measures, people in these countries are more in debt than Koreans.

The IIF noted that nearly one third of the countries studied showed increases in debt-to-GDP ratios as global household debt increased by $1.5 trillion in the first half of the year.

Household debt levels in the United States actually fell during the one-year period. According to data from the U.S. Federal Reserve, the country's household-debt-to-GDP ratio in the second quarter was 76 percent, which is 6 percentage points down from 82 percent recorded in the second quarter of 2020 and close to pre-pandemic levels at 74 percent recorded in the fourth quarter of 2019.

"Household debt in Korea is problematic both in terms of its size and the speed of growth," said Sung Tae-yoon, professor of economics at Yonsei University. "A major reason was the surge in home prices due largely to failed real estate policies by the government."

Interest costs for households are already rising. Loan rates are increasing as the country's financial regulators pressure banks to tighten lending. The Bank of Korea is expected to raise the base rate during this year's last rate-setting meeting, scheduled for Nov. 25.

Korea's central bank said in its regular financial stability report published in September that household interest costs would increase by 5.8 trillion won ($4.9 billion) compared to the end of last year if rates were increased by 50 basis points this year. The base rate was already raised by 25 basis points to 0.75 percent in August.

"According to the financial stability report, Korean households are spending 36 percent of their average income in paying loans and interest," said Kim Young-ik, a professor at Sogang University's Graduate School of Economics. "If interest rates move up, they will further be pressured to cut spending and that would ultimately lead to economic recession."

There are growing concerns that the Korean economy can be caught in perfect storm, where multiple risk factors combined turn into a critical threat to the country's financial stability. The risks Korea is facing include mounting household debt, asset bubbles, as well as the potential tightening of monetary policies through rate hikes.

"Major drivers for the country's stock market growth so far have been low interest rates and a recovery in the economy," Kim said. "However if the rate rises, surges in commodity prices and global supply bottlenecks eat up company profits, a collapse in the asset market bubble could become a reality."

"There have been no cases where household debt issue was resolved without settling home prices in major OECD countries," Yun Sung-hoon, a researcher at the Korea Insurance Research Institute, wrote in a report Monday. "Real estate prices must be stabilized for household debt issue to achieve a soft landing."