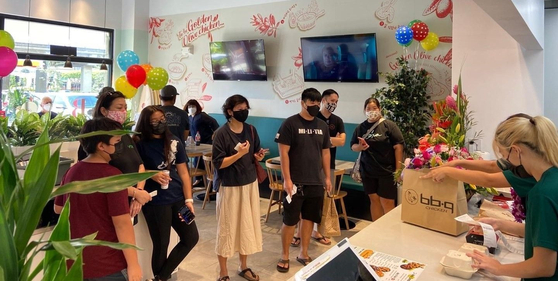 
Hawaii got its first BB.Q Chicken branch on Monday, with more to come amid a Korean fried chicken boom in the United States.

Genesis BBQ, the fried chicken chain with the most branches in Korea as of last year, opened a 112.39 square meter (1,210 square feet) branch in the Kuono Marketplace in Honolulu's Kahala neighborhood.

The branch pulled in an average $5,000 a day during a soft-opening period from Oct. 28, and sales on opening day on Monday jumped to $6,500. The Golden Fried Chicken, a crispy chicken without sauce, was the top seller. Secret Sauced Wings — fried chicken with sweet and spicy sauce — and Honey Garlic Chicken Wings were two other favorites.


“Our signature Golden Fried Chicken is gaining huge popularity among Hawaii locals, and we’ve been logging higher-than-expected sales even before the grand opening,” said a spokesperson for Genesis BBQ. “We are also getting inquiries about opening more franchises.”

Genesis BBQ said it opened a branch in Hawaii because of the tourists it attracts from around the world. Kahala is a neighborhood with many hotels and beachfront properties.

“I always had BB.Q Chicken when I went to Korea, and was sure I could succeed if I continued to serve food that tasted the same and had the same quality in Hawaii,” said Yoon Young-il, franchisee and manager of the new branch. “Starting with the Kuono Marketplace branch, we plan to open more branches in major commercial districts so that all customers in Hawaii can enjoy BB.Q Chicken nearby.”

Korean-style fried chicken has become popular in China, and is taking wing in other countries. The combination of fried chicken and beer, known as chimaek, was made iconic by a scene in the popular TV series "My Love from the Star" (2013-2014). Americans have caught on and in October, the word chimaek was officially added to the Oxford English Dictionary.

In a ranking announced by industry publication Nation’s Restaurant News in September, BB.Q Chicken ranked fifth among the 25 fastest-growing restaurant chains in the United States.

Food delivery is a big part of the BB.Q business plan in the U.S. Koreans are used to chicken being delivered to their homes, but the concept is new for customers abroad.

“Pizza was the most common type of food delivered in the United States, but not chicken,” said a spokesperson for Genesis BBQ. “People seem to have found the idea of getting chicken delivered very interesting.”

There are 76 BB.Q Chicken branches in the United States, available in 15 states including New York, New Jersey and California.