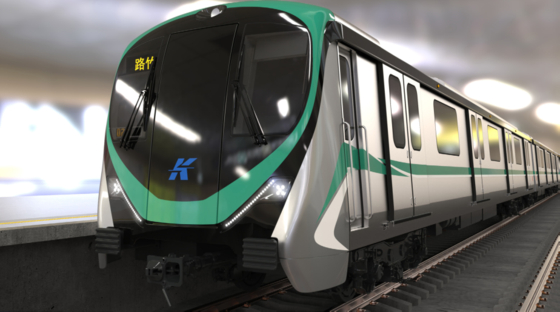 Hyundai Rotem's electric multiple units that will be supplied to the city of Kaohsiung, Taiwan [HYUNDAI ROTEM]

EMUs are trains with self-propelled carriages run by electricity.

Kaohsiung is extending its Red Line subway route by 9.3 kilometers (5.8 miles) and creating six new stations. Under the deal, which was jointly made with Singapore-based ST Engineering Electronics, Hyundai Rotem will supply EMUs and other railway systems.

The EMUs will run at a maximum speed of 80 kilometers per hour. A Train Control and Monitoring System will automatically analyze the conditions of trains and help reduce maintenance and energy costs.

Hyundai Rotem said the contract will mark a milestone in expanding the company’s presence in Taiwan's railway market. Kaohsiung's Red Line is planning another 3.78 kilometers of growth in the future, which Hyundai Rotem hopes to play a part in.

“The order from Taiwan proves that Hyundai Rotem’s experience in the EMU business has been recognized globally,” said a spokesperson for Hyundai Rotem in Tuesday’s statement. “We will try our best to establish a strong presence in the Taiwanese railway market by supplying quality EMUs to the country.”

The contract comes three years after the company landed its first order from Taiwan, which was worth 909.8 billion won. In June 2018, the company again clinched a 542.4-billion-won order to supply 80 driver-less light rail cars and related railway systems to the city of Taoyuan.

The image of the inside of the train [HYUNDAI ROTEM]