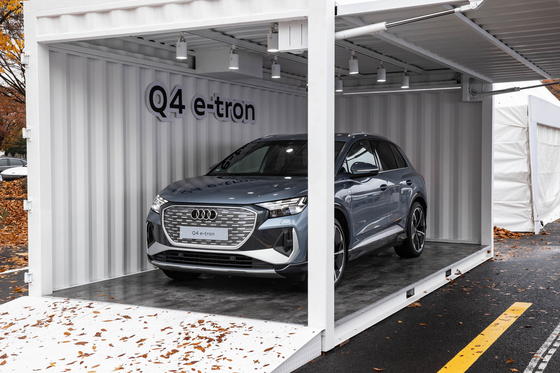 Audi Korea showed the all-electric Q4 e-tron SUV to the Korean press recently ahead of its launch early next year.

The Q4 e-tron is the second all-electric SUV model to launch in Korea following the e-tron SUV last year. It is the first imported electric SUV made on the Volkswagen Group's MEB production platform, which has been designed from scratch for electric vehicles rather than being a modification of how internal combustion vehicles were made.

The platform is shared by brands in the Volkswagen Group including Volkswagen and Audi.

The Q4 e-tron comes with a choice of batteries. The rear-wheel drive Q4 35 e-tron has a 55 kilowatt-hour (KWh) battery and the rear-drive Q4 40 e-tron has an 82 KWh battery. Both models are powered by a single motor.

The Q4 40 e-tron can drive 520 kilometers on a single charge based on the WLTP standard.

The highest trim – the Q4 50 e-tron quattro – comes with 82 KWh battery with dual motors. This four-wheel drive model is able to generate horsepower of up to 299 and takes 6.2 seconds to reach the speed of 100 kilometers per hour. Its maximum speed is 180 kilometers per hour.

Living up to its reputation for being innovative with lights, Audi will allow drivers of the Q4 to customize its headlight patterns -- for the first time in the world. Before, headlight and taillight patterns on Audi models changed depending on the driving mode of the vehicle. Owners of a Q4 e-tron will choose those patterns themselves.

Thanks to the MEB platform, the back seat is spacious for a compact SUV. There is no bump in the floor in the back, technically known as the transmission tunnel, and there is plenty of headroom.

Once the Q4 e-tron launches in Korea, it will have many competitors in the luxury compact SUV segment, including the Genesis’ GV60, Mercedes-Benz’s EQC and BMW’s ix3.

Audi wants to spearhead the high-performance segment of the electric vehicle market in Korea. The brand said it will launch the e-tron GT and RS e-tron GT within this year. The RS e-tron GT's maximum horsepower is 598 and has a maximum speed of 250 kilometers per hour.