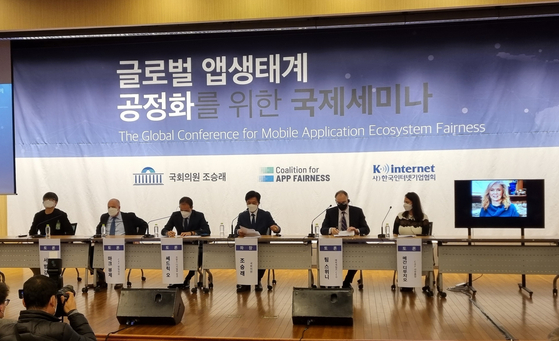 Attendees discuss the meaning and application of the “Anti-Google law” during “The Global Conference for Mobile Application Ecosystem Fairness″ held on Tuesday at the National Assembly in western Seoul. From left are: Seo Bum-gang, president of the Korea Webtoon Industry Association; Mark Buse, founding member of the Coalition for App Fairness (CAF); Cedric O, France's Secretary of State for Digital Affairs; Jo Seoung-lae, member of the ruling Democratic Party; Tim Sweeney, CEO of Epic Games; and Meghan DiMuzio, executive director of CAF. At far right is a picture of U.S. Senator Marsha Blackburn, who could not attend the seminar in person, but instead sent a video message. [YOON SO-YEON]


Google and Apple flouting Korean law is not just an abuse of power but a threat to democracy, according to one American tech executive who has been campaigning heavily against what he calls the tech duopoly.

“We must not allow them to control our digital lives,” said Tim Sweeney, CEO of U.S. game company Epic Games during a parliamentary seminar held at the National Assembly in western Seoul on Tuesday.

On Tuesday, executives and government officials from around the world gathered at the National Assembly to discuss the meaning and application of the “Anti-Google law” in a session dubbed “The Global Conference for Mobile Application Ecosystem Fairness."

It was attended by: Sweeney; Meghan DiMuzio, founder of the Coalition for App Fairness (CAF); Mark Buse, a founding member of CAF and Match Group’s head of government relations; and Cedric O, France's Secretary of State for Digital Affairs.

The "Anti-Google law," which is a revision to the Telecommunications Business Act, prohibits app market operators from forcing app developers to use in-app billing systems.

Although it went into effect in September, app market operators have been stalling in bringing major changes in their policies to comply with the new regulations.

On Nov. 4, Google said it will allow apps to use third-party payment systems in Korea, but it will charge fees near the level of its payment processing fees. Apple has been refusing to allow third-party payments systems altogether.

“No one is fooled by Google’s laughable excuse for a compliance plan, which substitutes mandatory in-app purchasing fees with mandatory fees on other forms of payment. And Apple’s refusal to comply with the new law altogether should be seen for exactly what it is — a slap in the face to the Korean people and the democratically elected leaders.”

O emphasized that the issue is not just an economic one, but one about democracy.

“App fairness and app payments are not the end of the story,” O said. “The problem we have to able to tackle is the way those companies are shaping our economies and economic footprints on our societies. This is an economic question, but it is also a democratic question.”

“Big tech companies see this as an attack on their bottom line, but in reality, it is their anti-competitive behavior that is the attack on innovation and progress,” Blackburn said.

“The way that Apple has ignored Korea’s new law tells you all you need to know about how this is going to play out in other countries. We have a responsibility to set new standards on behalf of creators and innovators and small businesses.” 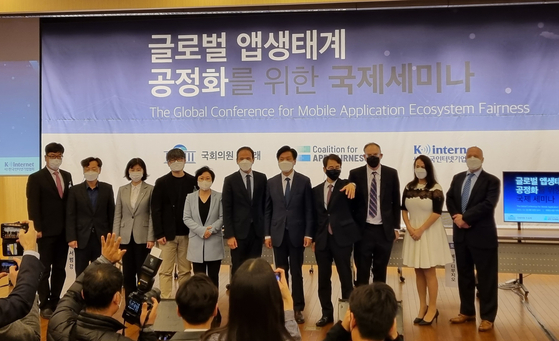 Speakers pose for photos during “The Global Conference for Mobile Application Ecosystem Fairness″ held on Tuesday at the National Assembly in western Seoul. [YOON SO-YEON]


The attendees said the future of the digital world is at stake.

“Google prevents developers from passing along their savings to consumers. When we launched Fortnite on Google Play and App Store with our new payment system, our aim was to pass along savings to consumers by by-passing the 30 percent platform fees. And for that, Apple and Google have chosen to block Fortnite.”

Sweeny stressed that it’s not a matter of how much app markets take, but the fact that they use their power to force certain payment systems.

“It’s critical that antitrust enforcement not allow a monopolist in one market to use their control over that market to impose control over related markets,” he said.

“Google should have every right to offer a payment service, but not require it.”

The government’s role is critical in making sure that the law doesn’t go ignored, experts said.

Kim Hyun, the vice chairperson of the Korea Communication Commission, said during the seminar that the commission will detail implementation regulations for the new law and start enforcing them from March next year.

“We will keep communicating with app market operators to resolve any issues we have,” Kim said. “We will make sure they allow fair competition and app purchases.”