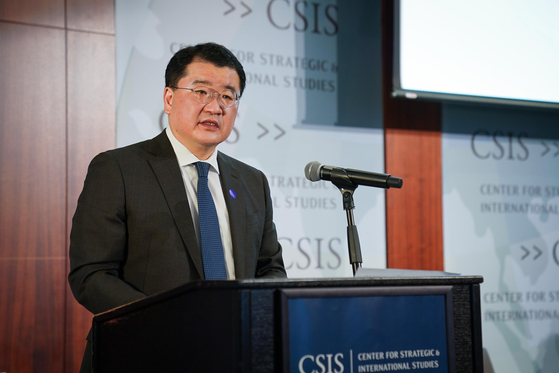 A declaration to formally end the 1950-53 Korean War could create a denuclearization process that "no one can easily walk away from," said South Korea's First Vice Foreign Minister Choi Jong-kun in Washington Monday.

"The peace process could likely be long, arduous and even torturous," Choi said in an annual South Korea-U.S. Strategic Forum at the Center for Strategic and International Studies (CSIS) think tank. "On the way, North Korea might be tempted to look back and doubt or hesitate to stay the course. In this vein, we need a framework that can keep Pyongyang on track."

Choi continued, "It is imperative to devise a structure from which no one can easily walk away from the whole process. By presenting North Korea with a clear picture of what it can gain or lose through the process, we may be able to convince them that their best bet is to stick to the process."

Choi's speech discussed South Korea's global engagement, its dynamic alliance with the United States and the North Korea issue in the forum co-hosted by the CSIS and the Seoul-based Korea Foundation.

President Moon Jae-in reiterated his call for an end-of-war declaration in an address to the United Nations in September as a means of encouraging Pyongyang to return to dialogue, which prompted a series of talks between South Korean and U.S. officials in recent weeks on the matter.

The Korean War ended in July 1953 with an armistice agreement rather than a peace treaty, hence the two Koreas remain in a technical state of war.

Seoul has previously suggested that an end-of-war declaration would be political and not legally binding. However, Choi's remarks at the forum appeared to indicate that such a declaration should go beyond that.

"By putting an end to the Korean War, our government intends to commence the process of making irreversible progress in denuclearization and turning the abnormally long armistice into a peace regime," said Choi.

A peace regime, he said, "will comprise a set of norms and principles that will define the future of the Korean Peninsula including those regulating the inter-Korean political relationship, military confidence building measures and economic and social exchanges."

He added that an end-of-war declaration will "mark a meaningful entry point" for the two Koreas and the United States to "shape this new order by opening up a venue for denuclearization dialogue."

Some analysts question what a formal end to the war would do to the status of U.S. troops in Korea and Seoul-Washington joint military exercises.

Security experts point out that an end-of-war declaration should not have a legal impact on the U.S. Forces Korea (USFK) and the United Nations Command, stationed in the country as a result of the 1953 Mutual Defense Treaty.

Whether North Korea even agrees to an end-of-year declaration, or if it will commit to any tangible steps in the denuclearization process remains unknown. Kim Yo-jong, sister of North Korean leader Kim Jong-un, called Moon's end-of-war proposal an "admirable idea," but Pyongyang has made clear Seoul and Washington need to withdraw their so-called "hostile" policy.

At the forum, Choi admitted that the North's response is "hard to predict" and said there is a need for a "wait-and-see" approach.

He noted that the Moon administration has about six months left in office and said on the peace process, "We do not aim to achieve everything at once. We do not push this in any hurry."

He said, "We want to create a structure and roadmap so that we can update, adapting to different circumstances and environments, and we believe that an end of war declaration is one good example."

Choi pointed out that there is no other country that can propose such a "bold initiative" than South Korea.

He continued, "Above all, it is the morally right thing to put an end to the war and begin the peace process.

Some experts at the forum expressed concerns that North Korea appears more focused on sanctions relief, while others questioned how much the Joe Biden administration, already hobbled with domestic issues, will focus on an end-of-war declaration.

Johnson took part in the Biden administration's review of North Korea policy, which seeks a "practical, calibrated approach including diplomacy as its first tool of resort." But he added that Washington "cannot give up on" simultaneously fully implementing and upholding the UN sanctions regime and U.S. bilateral sanctions.

He stressed the U.S. commitment to reinvigorating and modernizing its alliances, namely with South Korea and Japan, adding if it is "not getting any feedback" from the North, it will have to "do other things" to uphold stability in the region.

"It takes two to tango," said Johnson. "So we look forward to seeing if we have a dance partner that wants to come to the floor, but we will not stand idly by and ignore the threats that we see from North Korea's actions both in its nuclear and missiles program."

Later this week, Choi is expected to discuss the North Korea issue and Seoul's end-of-war proposal with his U.S. and Japanese counterparts in bilateral and trilateral talks in Washington.

Choi Young-sam, spokesman of Seoul's Foreign Ministry, clarified in a press briefing Tuesday, "There is no change at all in the basic position of the Korean government that the end-of-war declaration is a trust-building political and symbolic measure."

He said the vice foreign minister's remarks appeared to be made "in the context of emphasizing the continued engagement with North Korea."