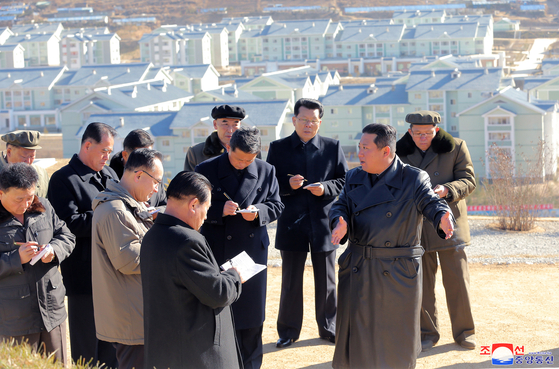 Clad in a black trench coat, Kim Jong-un provides on-the-spot guidance at the site of the urban development in Samjiyon in North Korea's Ryanggang Province. The report of the visit was released by the North's state-controlled Korean Central News Agency on Tuesday. [YONHAP]

Providing this on-the-spot guidance is a longtime tradition of the North’s leaders, dating back to the time of Kim Il Sung and Kim Jong-il, Kim’s grandfather and father, who ruled the country before him.

Samjiyon is a “revolutionary sanctuary” closely associated with Mount Baekdu, a dormant volcano on the Sino-North Korean border, famous for its caldera lake and significance as the birthplace of Dangun, the mythological founder of the first Korean kingdom.

According to the North’s official propaganda, Mount Baekdu was also where Kim Il Sung conducted guerrilla operations against the Japanese during their 1910-45 colonial occupation of Korea. It is also said to be the site of Kim Jong-il’s birth, although records show he was actually born in the Russian Far East.

As an administrative district close to Mount Baekdu, Samjiyon has received special attention from Kim Jong-un and the North Korean regime, which has been redeveloping Samjiyon as a “model city” since 2018.

Kim has paid 10 visits to Samjiyon since assuming power in December 2012.

During his on-site guidance session Tuesday, Kim called the construction works at Samjiyon “the starting point of a new revolution to jumpstart a civilized material culture and life for local people.”

Kim said that the “experiences accumulated during the Samjiyeon construction works” should be utilized “to inaugurate a transitional phase to push for the development of local construction and civil society.”

He also emphasized the importance of building up the North’s technological know-how, including its engineering and design capabilities, saying the “strengthening of the foundation for material technology is the most desperate prerequisite of the present era.”

One of the North’s ruling political ideologies is juche, which roughly translates to self-reliance. The doctrine not only directs the North’s foreign policy and military, which is defiant of what it calls outside interference into its nuclear weapons and missile development programs, but also its economic development.

Kim also offered encouragement and praise for those working on the Samjiyon construction projects.

“Despite the unfavorable northern environment, both the town and various districts and farms have been transformed into exemplary socialist cultural cities in the mountains by the continuous struggle of builders who have been pushing for vast construction,” Kim is reported to have said.

According to North Korean media reports, thousands of residences have already been built during the first and second stages of construction that were completed earlier.

Upon completion of the second stage of the development, Samjiyon County was upgraded to city status at the end of 2019.