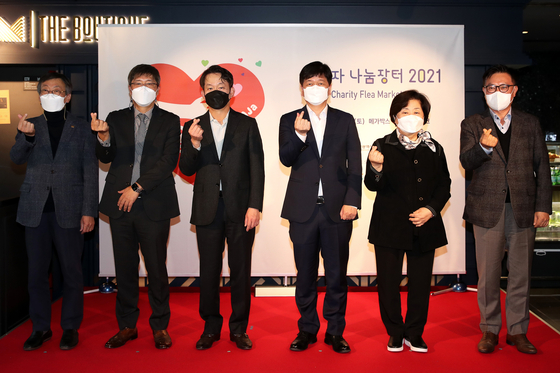 
As another sign of the nation returning to normalcy, the country's largest charity flea market successfully wrapped up a two-day event in Seoul and Busan over the weekend.

Co-hosted by the JoongAng Ilbo, JTBC and the metropolitan offices of Seoul and Busan, some 10,000 people attended the 17th WeAJa Charity Flea Market held in 11 different Beautiful Store locations, a nonprofit charity shop.

The fair’s offline event raised 62.37 million won ($52,861), all of which will go towards helping vulnerable populations at risk from the effects of climate change and children from families suffering in the aftermath of the pandemic.

The flea market’s celebrity auction was particularly popular as eager bidders poured into the fair’s venues to submit bids for items donated by high-profile public figures, athletes, actors and singers.

The highest bid in this year’s offline WeAJa auction was for a framed calligraphy painting by Chun Ho-hwan, president of Tongmyong University in Busan.

“I am a huge fan of him and his calligraphy,” said the 58-year-old bidder surnamed Jeong, who bought the painting for 1.5 million won.

The four Chinese characters elegantly swished across a meter of rice paper, instructing that one must be patient and calm in order to achieve great aspirations.

Sefton Nadia, a foreign national who lives in Korea, took home a CD by Korea’s hit boyband BTS that was signed by Jimin, one of the members, after bidding of 530,000 won.

Auctions will continue until December online for goods donated by more celebrities, including retired golfer Pak Se-ri and Wooyoung of the hit boyband 2PM, and the schedule is on the homepage of the event, weaja.joins.com.

This year’s fair emphasized the theme of the environment and sustainability.

Some featured interactive activities that attracted young children and couples. Visitors took on the challenge of making bracelets and keyrings from leftover pieces of cowhide leather and learned how to repot in gardening booths.

“I wanted my children to be environmentally conscious, so I was very excited to hear there would be interactive stations with hands-on activities that teach the importance of sustainability,” said Jeong Yoo-hyeong, 35, who was lined up at the gardening booth with her three girls.

“We haven’t been able to participate in many programs like this because of Covid-19, so my girls and I are really excited to be here today.”

There were also free viewings of two short animated films: “The Isle of Trash,” a black comedy film directed by Choi Ji-won, and “Stars on the Sea” by Jang Seung-wook, which highlights the plight of endangered polar bears by portraying a family that is forced to leave home because Earth is suddenly deluged with water.

The JoongAng Ilbo started the WeAJa Charity Flea Market in 2005 to mark the media group’s 40th anniversary. Since then, it has raised over 2 billion won.