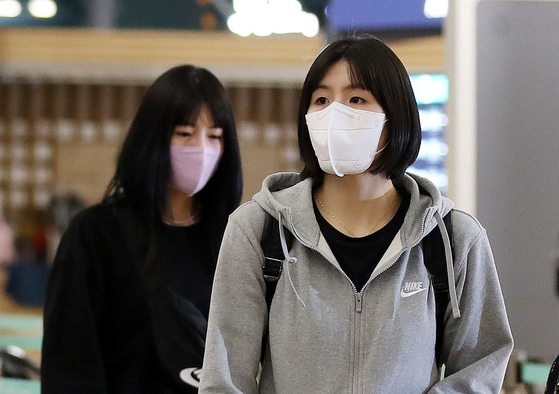 Lee Jae-young flew to Greece with her twin sister Lee Da-young on Oct. 16 to join the club after obtaining visas from the Greek Embassy in Seoul on Oct. 12.

Lee Da-young debuted with PAOK on Oct. 21 at a home match against Olympiacos and raised three points for the team with attacks and blocks. She was named MVP of the round on Oct. 30, ahead of a match against Aonnnne Amazones. She had two aces and one block, scoring five points during the match.

Lee Jae-young at the time was benched due to pain in her left knee and was then prescribed six weeks of treatment and rehabilitation.

The sisters left Korea's V League after being embroiled in a scandal in February when a former middle school teammate of the pair accused them of being school bullies, listing 21 specific allegations including claims that one of the sisters threatened her with a knife. The Korean national team indefinitely suspended the pair and banned them from ever holding coaching positions.

After Kim Yeo-il, general manager of their former club Heungkuk Life Insurance Pink Spiders, reportedly told the board of directors of the Korea Volleyball Federation on June 23 that the two players would be registered for the 2021-22 V League season, public opinion flared up and the club eventually dropped the plan to register the pair.

As effectively free agents, the sisters received an offer from PAOK Thessaloniki, but required an International Transfer Certificate (ITC). An ITC can be granted only by the Korea Volleyball Association or Fédération Internationale de Volleyball (FIVB) under the assumption that all parties — the players, the original club, the potential club and the association — agree on their transfer.

The Korea Volleyball Association refused to issue the certificate, quoting rules regarding international transfers that prohibit any players who have conducted violence or sexual harassment, manipulated game results or evaded military service from playing overseas.

However, the FIVB didn't accept the justification and issued an ITC for the pair. The ITC is effective for nine months, from Sep. 6 to May 31, 2022.

PAOK Thessaloniki is a club in the first division Greek volleyball league, A1 Ethniki. The season started on Oct. 9 and will end next March. PAOK sits at fifth place as of press time, with six wins and two losses. Lee Da-young will continue on with the season schedule as usual while Lee Jae-young will be looking to join the club next January.