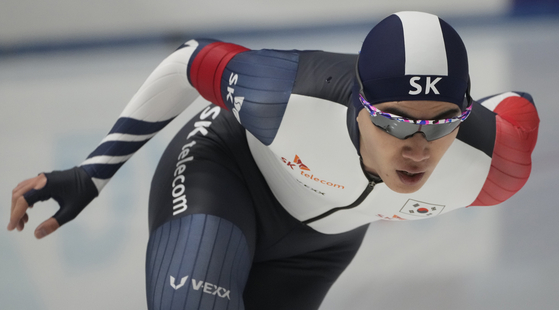 Kim Min-seok in action during the men's 1500-meter race at the ISU Speed Skating World Cup in Tomaszow Mazowiecki, Poland, on Saturday. [AP/YONHAP]


The Korean national speed skating team will now head to Norway for the second International Skating Union (ISU) World Cup after winning one gold medal at the first ISU World Cup in Poland.

Kim Min-seok won the silverware after a big comeback in the men's 1500-meter division A race at Arena Lodowa in Tomaszow Mazowiecki, Poland, on Saturday.

Despite Kim Min-seok's victory, winning just one gold medal is disappointing for Korea as the country has the 10th most speed skating gold medals in the world and the most in Asia. Korea has five gold medals, eight silver medals and three bronze medals.

Kim Bo-reum, two-time Olympian and silver-medalist at the the 2018 PyeongChang Games finished in sixth place at the women's mass start on Monday, coming in at 8:26.700 with six additional sprint points, totaling 76 points, putting her ahead of compatriot Park Ji-woo, who finished in 12th with 8:26.590.

The first four competitions of the World Cup series serve as qualifying events for the 2022 Beijing Winter Games. Olympic berths will be given out to the top athletes, determined by the overall results of the first four World Cups. Now that the first competitions of the ISU World Cup series has finished in Poland, athletes head to Norway where the second World Cup will take place from Nov. 19 to 21. The third will be held in the United States from Dec. 3 to 5 and the fourth in Canada the week after. The fifth series will take place after the Games.