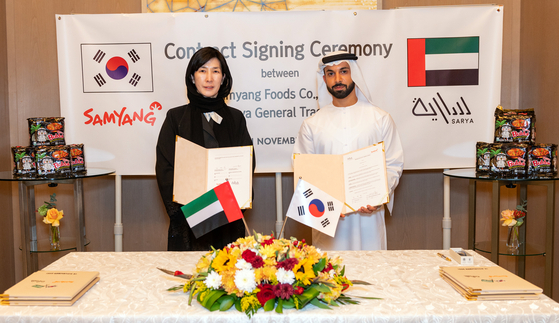 
Samyang Foods, known for its spicy Buldak Ramen, is teaming up with Sarya General Trading to sell products in the United Arab Emirates.

Samyang Foods already controls 71 percent market share for Korean instant ramyeon sold in UAE. Sarya General Trading’s goal is to raise the figure to 85 percent by 2023, according to Samyang Foods.

The spicy Buldak noodles are Samyang's most popular noodle product in the UAE.

Samyang sells its products in 13 countries in the Middle East and the UAE is the biggest market. Its products are sold in major discount marts like Carrefour and convenience stores.

Samyang estimates it will export 25 billion won ($22 million) worth of products to the Middle East this year and aims to double that by 2023.

“The UAE is a crucial market in the Middle East because it has large economy and is a hub of culture and retail,” said a spokesperson for Samyang Foods in a statement. “Through the partnership, we plan on expanding the Middle East market starting from the UAE.”

Ottogi ups prices as inflation leaves it with no choice