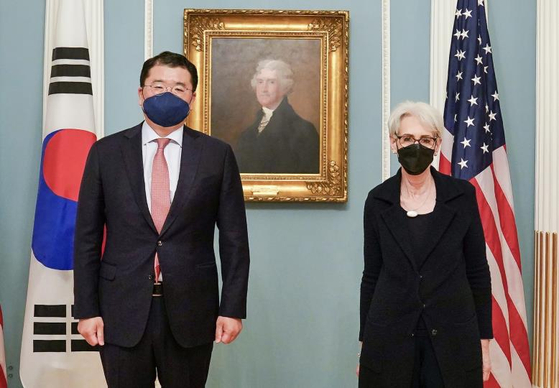 Seoul and Washington may not see eye-to-eye on an end-of-war declaration, with no mention of the issue in a U.S. State Department statement after talks between high-level diplomats Tuesday.

South Korean First Vice Foreign Minister Choi Jong-kun and U.S. Deputy Secretary of State Wendy Sherman held an hour-long meeting in Washington amid Seoul's push for a declaration to formally end the 1950-53 Korean War as a means of getting Pyongyang to return to dialogue.

The two diplomats "assessed the seamless communication and coordination under way at every level on ways to make progress in the Korea Peninsula peace process, including an end-of-war declaration," according to South Korea's Ministry of Foreign Affairs in a statement after the talks. They also "agreed to continue consultations on practical measures to bring North Korea to the dialogue table."

But in its statement after the talks, the U.S. State Department  made no mention of the proposed end-of-war declaration. It only mentioned that the two envoys discussed Pyongyang and reaffirmed their "shared commitment to the complete denuclearization of the Korean peninsula."

The Moon Jae-in administration has in recent weeks renewed its push for a formal end to the Korean War, which ended in July 1953 with an armistice agreement rather than a peace treaty.

However, U.S. National Security Adviser Jake Sullivan said on Oct. 26 that Seoul and Washington may differ "on the precise sequence or timing or conditions for different steps" for an end-of-war declaration.

Arriving in Washington Sunday, Choi said there had been some progress in end-of-war discussions and anticipated "good results" soon.

During a speech at a forum held at the Center for Strategic and International Studies think tank in Washington Monday, Choi proposed an end-of-war declaration to "devise a structure from which no one can easily walk away" and to "commence the process of making irreversible progress in denuclearization and turning the abnormally long armistice into a peace regime."

He said an end-of-war declaration "would mark a meaningful entry point for [the] two Koreas and the U.S. to shape this new order."

The Foreign Ministry didn't elaborate on whether Choi and Sherman discussed such ideas.

Ned Price, the State Department spokesman, said in the statement on the bilateral talks that Sherman welcomed South Korea's "regional and global leadership and stressed the U.S. commitment to working with allies and partners to defend the rules-based international order."

Price said the two sides underscored that cooperation among South Korea, the United States and Japan is essential to facing the global challenges of the 21st century, including combating Covid-19 and the climate crisis, and "ensuring resilient supply chains and post-pandemic economic recovery."

He added that they reaffirmed the bilateral alliance "as the linchpin of peace, security, and prosperity in the Indo-Pacific and beyond."

Seoul's Foreign Ministry likewise said that Choi and Sherman discussed the Korea-U.S. alliance and other issues of common interest, including Covid-19 vaccines, climate change and the global supply chain crisis.

The ministry said the two sides "discussed the current issues between Korea and Iran" and that Choi emphasized continued diplomatic support for the Iran nuclear negotiations, while Sherman noted Seoul's contributions and role and agreed to continue close communication.

Seoul has been seeking various ways to release Iranian assets frozen in the country under U.S. sanctions through cooperation with Washington after the Donald Trump administration in 2018 withdrew from the 2015 Joint Comprehensive Plan of Action (Jcpoa), under which Iran agreed to curb its nuclear weapons program in exchange for a lifting of sanctions.

These were the third bilateral vice foreign ministerial talks held this year. On Wednesday, Choi and Sherman were scheduled to hold a trilateral meeting with their Japanese counterpart Takeo Mori and were expected to hold a joint press briefing afterwards.