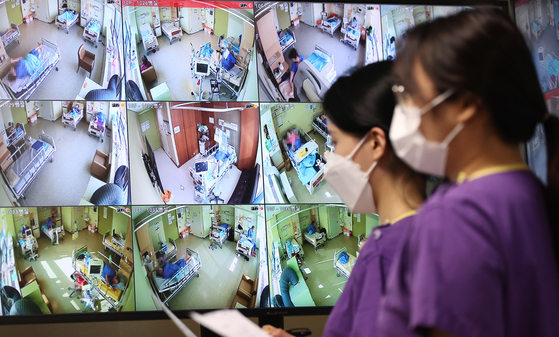 Medical workers look at critical Covid-19 patients at the control center of Seoul Medical Center in Jungnang District, eastern Seoul, on Wednesday. According to government data, 80.6 percent of sickbeds for such patients in Seoul had been occupied as of 5 p.m. the previous day, raising concerns over a sickbed shortage amid a surge of new cases. [YONHAP]


Korea is speeding up booster shots for the elderly, the sick, people in their 50s, soldiers, police and firefighters amid soaring infections and hospitalizations.

For people over the age of 59, patients and employees at nursing hospitals and other social welfare facilities, employees of hospitals, and people with underlying diseases, booster shots will be given four months after their last vaccine jab instead of six months. For people in their 50s, soldiers, police and firefighters, the period was shortened to five months.

“The infection rate among the elderly aged 60 or older more than doubled in a month,” Kim said, “and they account for 82 percent of severe cases and 97 percent of fatalities. It is a very serious situation.”

People who got the one-dose Janssen vaccine and those with reduced immunity will still be able to get a booster two months after their jab.

The government believes 13.78 million people will be eligible to receive booster shots through the end of this year under the new guidelines. That is twice of the originally planned number.

Health authorities said they came up with the plan after reviewing the number of Covid infections, critical cases and fatalities, antibody titers (levels) and foreign cases.

After analyzing antibody levels after Covid-19 vaccines, it was found that Pfizer recipients had their antibodies maintained at a constant level until five months after their second dose and AstraZeneca recipients until three months after their second jab, which waned after then. In particular, the officials said breakthrough infections among the elderly significantly increased after four months.

Citing a study conducted in Israel, which kicked off a booster program for its general population months ago, a booster shot recipient's risk of catching the virus decreased ten times and the risk of developing a severe case was reduced twenty times compared to people who only completed their initial inoculation.

Patients and employees at nursing hospitals and employees of hospitals can get a booster immediately, while the schedules for other social welfare facilities where a medical team needs to visit for vaccinations are still being discussed.

People who are eligible can make a reservation starting Nov. 22, and reserve appointments after Dec. 5.

Those who want to get a booster earlier can try with a so-called leftover vaccine, which will be made available from Nov. 22.

Starting Thursday, the government is also set to limit administering the Moderna’s vaccine to people under the age of 30 and instead give the Pfizer jab.

This comes after some European countries, including Sweden, Finland, Germany and France, paused the use of Moderna on people under 30 as they had a higher risk of developing myocarditis and pericarditis than people who got Pfizer.

“Korea hasn't had much difference in the number of reports of myocarditis and pericarditis between the two vaccines,” Choi Eun-hwa, chair of the Korea Advisory Committee on Immunization Practices, told a briefing, “but as a preemptive measure for safety, we decided to partly limit the age group for Moderna inoculations.”

Authorities advised people under 30 who haven’t yet received a vaccine to get Pfizer, and those who already got their first dose with Moderna to get a Pfizer shot for their second.

For boosters, however, Moderna will be allowed for use, as the Moderna dose for a booster uses a single 50-microgram shot, compared to initial Moderna vaccine doses, which were 100-microgram shots.

The government also announced that it will gradually stop using AstraZeneca vaccines.

“Inoculations with the AstraZeneca vaccine decreased a lot recently, and we were administering less than 1,000 a day,” the committee explained.

Korea experienced another big jump in Covid-19 daily infections and severe cases on Wednesday, after two weeks of the eased social distancing measures.

It marked the second largest figure the country has ever reported since the start of the pandemic, following close behind the record set on Sept. 25 of 3,270.

Critically ill Covid-19 patients hit a new high of 522, rising by 27 from the previous day.

Health authorities said Wednesday that they will make their virus risk assessment weekly based on a new five-tier system, and decide whether to continue with its gradual return to normalcy.

For risk assessment, the government will use 17 indicators in three categories — medical and quarantine systems, Covid-19 outbreaks and vaccinations.

Apart from the weekly assessment, an emergency evaluation will be held to review whether to halt the “With Corona” strategies and reintroduce stricter virus curbs when over 75 percent of intensive care beds are occupied; when the risk assessment results reach the fourth degree or higher in the five tiers; or when contingency plans are deemed necessary after consulting with the advisory panel.