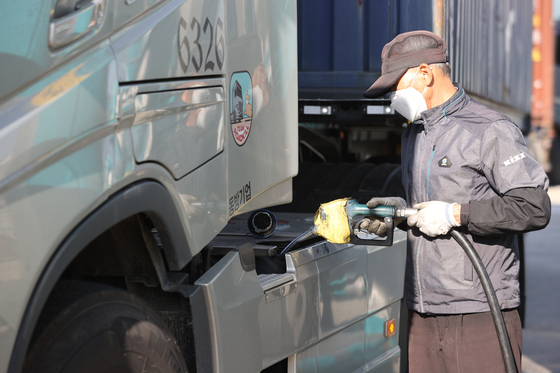 A gas station employee in Euiwang, Gyeonggi, on Wednesday fills up DEF on a cargo truck. [YONHAP]

The government continued to promise a stable supply of diesel exhaust fluid (DEF), needed for millions of vehicles to run.

On Thursday, the government announced that daily production by five major manufacturers has been exceeding 600,000 liters.

The government estimates that, on average, 600,000 liters of the DEF was consumed every day.

Before Monday, the daily supply of DEF was less than 500,000 liters.

The government designated 100 gas stations for owners of diesel vehicles to source DEF. Some 67 percent of the 600,000 liters that are needed every day is being supplied to those 100 gas stations.


“Overall the supply and distribution seems to be stabilizing,” the government said in a statement.

Hong said while the current supply of DEF is low, supplies coming from China and Vietnam will prevent a major panic.

Yet, many diesel vehicle owners and drivers still struggled to find DEF at gas stations. Gas stations that had it offered wildly different prices.

Some gas stations demanded drivers fill up with gas in order to be able to purchase DEF.

While the government said it will try to keep the market price of DEF at 1,200 won per liter, some gas stations were overcharging.

In an online group chat of 1,000 cargo truck drivers, one claimed that a gas station located on the expressway headed to Busan was selling a liter of DEF for 12,000 won.

Another wrote that a gas station in Gyeonggi was only selling single DEF containers to drivers that filled up their vehicles with gas and a single 10-liter container cost 80,000 won.

The government has warned against hoarding and profiteering.

Four Chinese on Nov. 12 allegedly smuggled in 8,200 liters of DEF from Chengdu, China, and tried selling it in 10-liter batches for 60,000 won each, six times the current market price.

On Nov. 13, two people including a gas station owner in Paju, Gyeonggi, allegedly stocked up on 5,450 liters of DEF, which exceeded 110 percent of their average monthly sales and could be considered hoarding.

People found guilty of hoarding face fines of 100 million won or prison time of up to three years.

Meanwhile the government said Thursday it is setting up an early warning system for 3,000 to 4,000 imported materials to prevent a crisis similar to the DEF shortage.

First 100 to 200 items will be under close review until the end of this year. They include magnesium and tungsten.