Sales of 'villa' apartments are hottest in Seoul

Sales of 'villa' apartments are hottest in Seoul 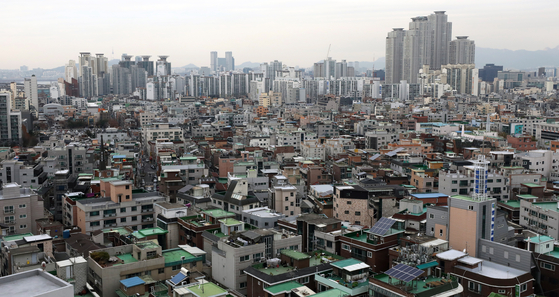 A view of villas in Gwangjin District, eastern Seoul. [NEWS1]


Half of the residential real estate transactions in Seoul this year were of apartments in so-called villas, older building with fewer than five stories, which have not gotten as expensive as their taller neighbors.

In Korea, villas are generally the homes of low-income households.

There were 51,708 villa transactions during the January-to-September period in Seoul, accounting for 49.5 percent of all residential property transactions, according to a report by real estate information provider Rsquare based on data compiled by the Korea Real Estate Board.

By district, villas were especially popular north of the Han River, where prices are relatively cheap compared to southern Seoul. In Eunpyeong District, 69.5 percent of all property transactions were in villas followed by Gangbuk District with 66.5 percent and Dobong District with 60.2 percent.

A total of 646 villa apartments were newly registered for sale in November as of Wednesday, compared to 141 apartments in taller buildings, according to data from the Seoul Metropolitan Government’s real estate information center. 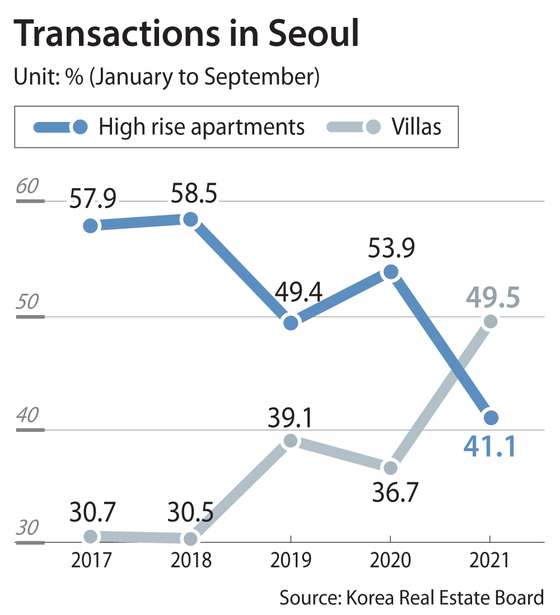 Meanwhile, a growing number of commercial buildings is standing vacant in Seoul due to the Covid-19 pandemic. Many tenants have moved out and new tenants have been slow to move in.

The vacancy rate of medium- and large-sized commercial buildings in Seoul was 9.7 percent in the third quarter, up 2.2 percentage points compared to the previous quarter, according to data compiled by Korea Real Estate Board.

That’s the highest quarterly vacancy rate since the agency started collecting data in its current form in the first quarter of 2013.

The Korea Real Estate Board defines buildings with three stories and over 330 square meters (3,552 square feet) in total floor area as medium- and large-sized commercial buildings; anything smaller is considered a small buildings. In the third quarter, the vacancy rate for small commercial buildings in Seoul was 6.7 percent, up 0.2 percentage points from the previous quarter.

Once-crowded shopping districts emptied out during the pandemic. About 47.2 of all medium- and large-sized commercial buildings were vacant in Myeong-dong, central Seoul, while 23 percent were empty in Gwanghwamun in central Seoul. Nearly 20 percent of buildings in Nonhyun-dong, southern Seoul, were unoccupied in the third quarter.

“It seems like some major shopping stores in the districts failed to attract customers this year [due to the pandemic],” Rsquare said in the report.