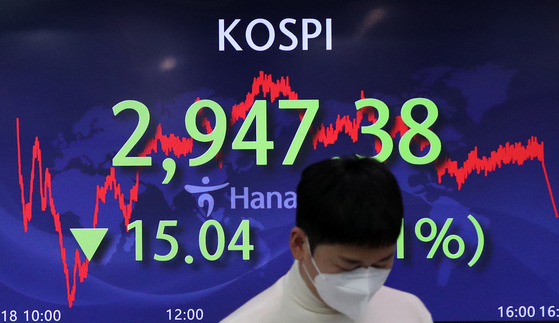 A screen at Hana Bank's trading room in central Seoul shows the Kospi closing at 2,947.38 points on Thursday, down 15.04 points, or 0.51 percent, from the previous trading day. [NEWS1]


Stocks retreated for a third straight session Thursday, as investors worried that the fast recovery from the pandemic is spurring inflation pressure. The won rose against the dollar.

Trading volume was moderate at about 533 million shares worth some 9.9 trillion won ($8.4 billion), with losers outnumbering gainers 608 to 256.

The key stock index got off to a weak start, tracking overnight losses on Wall Street, with tech and chemical shares weighing on the market.

Local stocks declined as recent estimate-beating economic data in the United States and China fanned concerns that the Federal Reserve may hasten its timeline for raising its key interest rate to vent pressure from the rising inflation rate.

"[The Kospi] seems to be fluctuating along with the foreign investors' trading, since inflation risks are still lingering on the market," said Mirae Asset Securities analyst Park Gwang-nam.

Trading hours were delayed by an hour due to the College Scholastic Ability Test.

The local currency closed at 1,180.4 won against the dollar, down 2.1 won from the previous session's close.