Lotte Homeshopping has invested in a company that produces dramas, as it endeavors to grow and stay relevant in the increasingly competitive retail world.

Goals of the equity participation are wide ranging. Lotte Homeshopping hopes to use the company’s production infrastructure in order to generate new types of commerce-related programming beyond home shopping and live commerce, said Kim Yu-mi, a spokesperson for Lotte Homeshopping.

Live commerce is similar to home shopping, except it is streamed online and in real time. It has lately become a popular sales channel for retail companies.

Lotte Homeshopping also plans to invest in dramas created by Chorokbaem Media and to invest spinoff products, such as webtoons or web novels based on the original works. L.Play, a streaming service, is to be added to the home shopping app, and the content generated together with Chorokbaem Media will be shown on it.

Product placements on Chorokbaem Media and on the streaming service are also envisioned.

The company added that it is investing in the metaverse to provide customers the experience of shopping virtually. 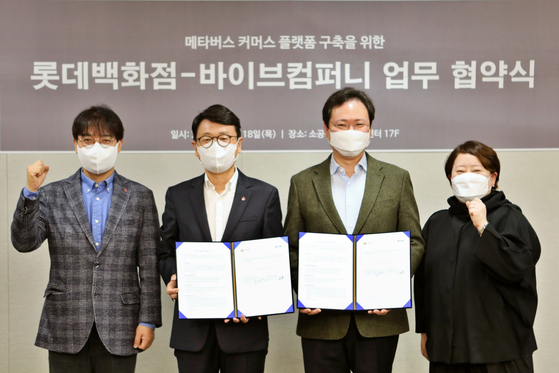 
Lotte Department Store announced on the same day the signing of a memorandum of understanding with Vaiv Company to create a commerce service utilizing the metaverse.

Vaiv Company offers services based on big data, artificial intelligence and digital twins, which are virtual replicas of the real world.

Lotte Department Store hopes its customers will ultimately be able to virtually try on products that are displayed at the offline stores through an avatar. Virtual exhibitions are also planned.

“We signed a partnership with Vaiv Company that has capacity in big data and digital twins to preemptively realize a future department store that matches the metaverse period,” said Hwang Beom-seok, Lotte Department Store CEO in a statement.