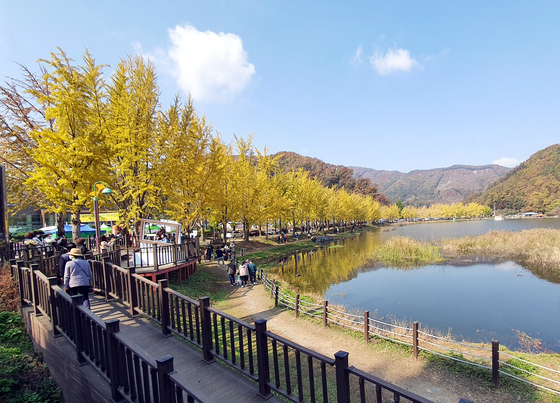 
Although gingko trees during the fall season are notorious for the unpleasant odor from their fruit, they are still viewed as the pinnacle of colorful autumn foliage with their bright yellow hues. Gingko trees are one of the most common types of roadside trees in Korea, but also many monumental gingko trees are scattered across the country, flaunting long histories and legends. Twenty-four gingko trees in Korea have been designated as natural monuments.

Gingko trees have inhabited this earth for 300 million years, and some even famously survived the atomic bombing of Hiroshima. The species originated in China and is commonly seen today in Korea, Japan and China. Gingko trees are said to have been introduced to the Korean Peninsula during the Three Kingdoms Period (57 B.C. to A.D. 668) around the same time when Buddhism spread to Korea. Many gingko trees throughout the country have witnessed countless historical events and tragedies such as the Japanese invasions of Korea (1592–1598), the Korean War (1950-1953) and the burning of Naksan Temple in Gangwon (2005). 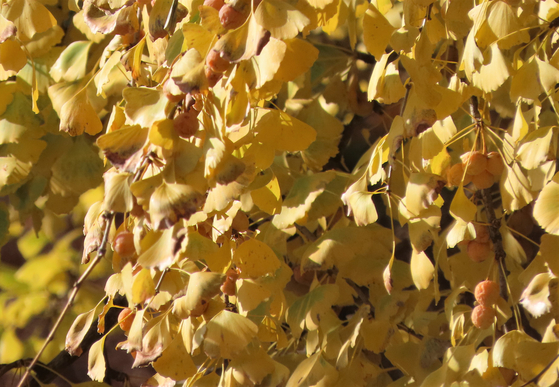 Yellow leaves and gingko fruit on the gingko tree at Yongmun Temple in Yangpyeong, Gyeonggi, which is designated as a natural monument. [KIM HONG-JUN]


While cherry blossoms represent spring in Korea, falling gingko tree leaves signify autumn to many — a sign that they should hurry to go hiking and fully enjoy the autumn foliage before it gets too cold. There is a long list of majestic natural monument gingko trees across the nation for you to check out before this year’s foliage season completely comes to an end.

One on the list is the 42-meter-tall (138-feet-tall) gingko tree at Yongmun Temple in Yangpyeong, Gyeonggi, which is also Korea’s tallest tree. The tree’s height is the same as a typical 15-floor apartment. The temple received approximately 12,000 visitors during the first weekend of November, many of whom came to marvel at the towering tree.

The Yongmun Temple gingko tree is the tallest tree in Korea, standing 42 meters (138-feet) tall. It is also over 1,000 years old. [KIM HONG-JUN]


There are two legends about how the Yongmun Temple gingko tree came to be. One says it sprouted when Buddhist monk Uisang (625-702) in the Silla Dynasty (57 B.C.-A.D. 935) stuck his cane into the ground. The other legend says that Crown Prince Maui, son of the last king of Silla, planted it while he was on his way to Mount Kumgang to become a hermit after his country’s downfall. The tree is 1,300 years old according to the former story, but 1,100 years old based on the latter.

“Although there’s no written record, experts lean toward the tree being 1,100 years old upon examining its growth,” said author Goh Kyu-hong, who has published multiple books on trees.

Thanks to its longevity, the Yongmun Temple gingko tree was so valued that it became the first tree to receive a high-ranking honorary government title during the Joseon Dynasty (1392-1910) under King Sejong the Great (1397-1450). 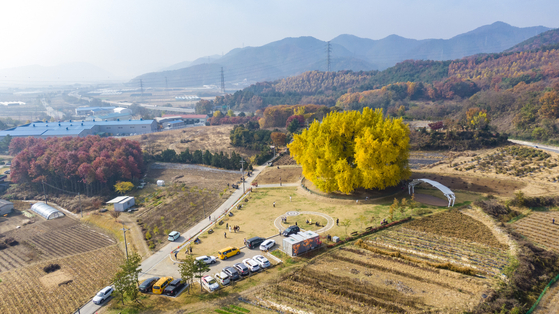 The Bangye-ri gingko tree in Munmak, Wonju in Gangwon is 32 meters tall and is estimated to be around eight centuries old. [YONHAP]


The Bangye-ri gingko tree in Munmak, Wonju in Gangwon is another popular arboreal attraction. This tree stands 32 meters tall and is estimated to be around eight centuries old.

“This village used to be quiet before the Covid-19 pandemic, but visitors tripled last year, then quadrupled this year,” said Bangye-ri’s village head Chae Beom-sik. “An average of 4,000 people visit a day, whether it’s a weekday or the weekend. There’s no restaurants around, and the nearest convenience store is 1.5 kilometers away, but people swarm in for the beauty of this tree alone.”

On Nov. 4, even the police showed up on the scene for traffic control when about 1,000 visitors gathered in front of the tree at one time.

The legend of the Bangye-ri gingko tree says a Buddhist monk passing by stuck his cane into the ground, causing the tree to sprout — a story similar to that of the Yongmun Temple gingko tree — and that a white snake used to live inside it. 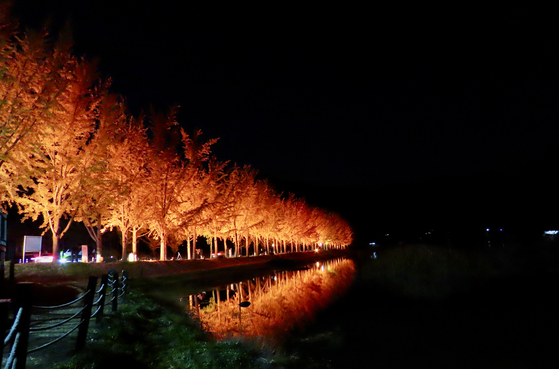 
Why are people gathering to admire trees in the midst of a pandemic? According to Professor Lee Hoon of Hanyang University’s School of Tourism, this is precisely the “Covid-era travel trend."

“Due to the pandemic, a small number of people such as couples or families making a simple trip to outdoor spots in nature has become the trend,” he said, “especially in cars, where they don’t have to be in close contact with strangers.”

The gingko tree road alongside Mungwang Reservoir in Goesan, North Chungcheong has also grown popular among tourists. The trees are enshrouded in mist around sunrise, glow in the sunset and are illuminated by streetlamps at night. 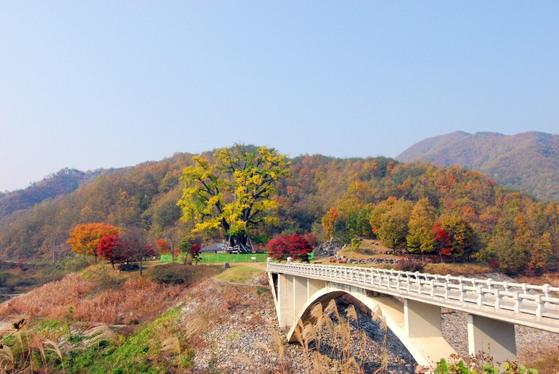 The 700-year-old gingko tree in Yonggye-ri, Andong in North Gyeongsang was once at risk of being submerged due to a dam construction, but locals moved it to where it stands now. [JOONGANG PHOTO]


The 700-year-old gingko tree in Yonggye-ri, Andong in North Gyeongsang was once at risk of being submerged due to the construction of the Imha Dam in the late 1980s. But then-CEO Lee Sang-hee of the Korea Water Resources Corporation and tree transplant expert Lee Cheol-ho joined forces with local residents to lift up the 680-ton (1.36 million-pound) tree and save it from submersion. The transplantation process took four years and cost 6 billion won ($5 million), but was deemed worth it in order to save the seven-century-old tree.

A 1,000-year-old gingko tree in Goesan, North Chungcheong comes with a speed limit, as it is located inside the campus of Cheongan Elementary School. 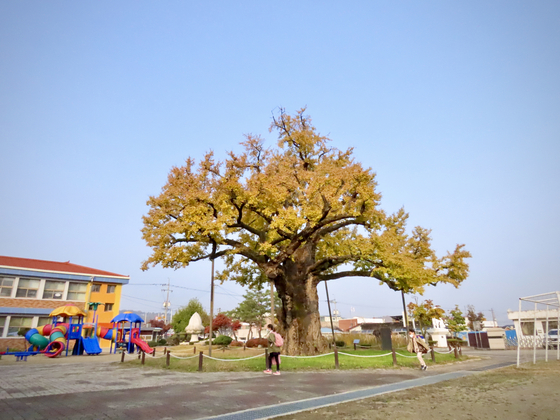 
“This school was built in 1911, so the tree has spent one-tenth of its life listening to the laughter of children,” said an official of the elementary school. “I bet the tree enjoyed it.” 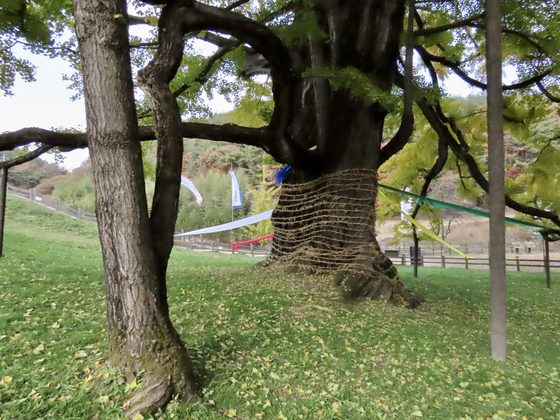 The gingko trees at Yeongguk Temple in Yeongdong, North Chungcheong, are named “three-generation gingko trees,” because a second trunk stemmed from the original tree, and then a third tree grew from the second trunk. [KIM HONG-JUN]


These three 1000-year-old gingko trees are each located on a mountain slope, in a valley and in a field.

“It’s difficult for a gingko tree to organically grow on its own, so usually someone has to plant it,” said author Goh. “So when a gingko tree is standing in a mountain region or field by itself, it most likely means that the site used to be a temple or house way back when.” One example is the Neukgu-ri gingko tree in Samcheok, Gangwon, which stands alone almost randomly in the middle of a mountainous area. The tree is estimated to be approximately 1,500 years old, making it one of Korea’s oldest trees. 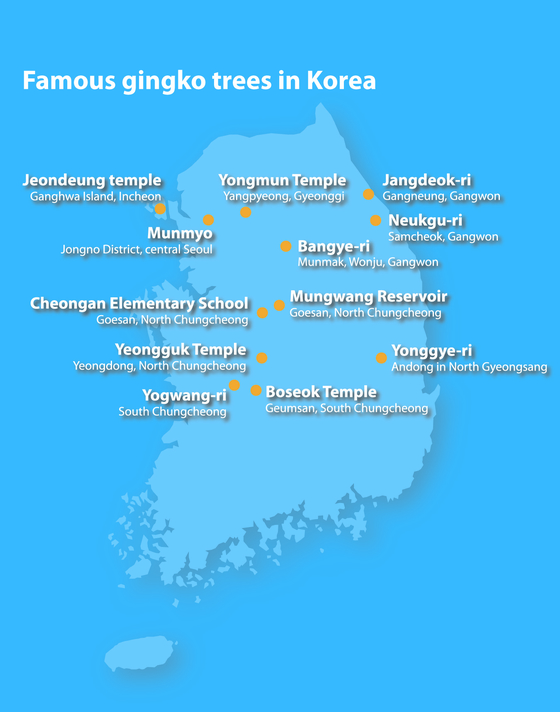 Gingko trees in Seoul’s Confucian shrine Munmyo, Jeondeung temple on Ganghwa Island, Incheon, and the Jangdeok-ri gingko tree in Gangneung, Gangwon all share a similar legend: Gingko fruit smelled so bad that locals could hardly focus on their everyday lives, so they held rituals to beg the trees to stop bearing fruit — then the trees changed from female to male and indeed stopped producing the smelly orange berries.

Although we know today that it is scientifically impossible to change a tree’s gender, author Goh says these seemingly silly tales reflect the traditional values of Koreans.

“Even when the gingko odor was so foul, the legend indicates that our ancestors never considered cutting down trees,” he said. “It reflects our ancestors’ values and determination to live together with nature, so the legends have deeper meaning.”