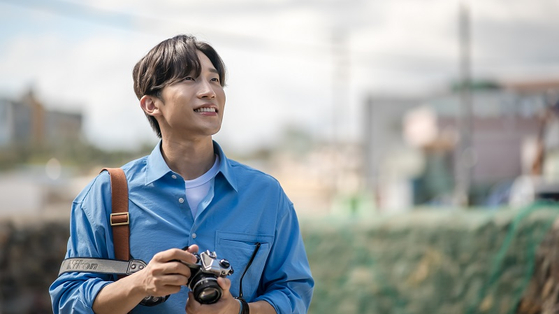 Actor Lee Sang-yi is one of the actors who will appear in the virtual reality content in LG U+'s app U+DIVE based on Studio Dragon's popular television series "Hometown Cha-Cha-Cha." [STUDIO DRAGON]


Production company Studio Dragon is further expanding the usage of its intellectual property (IP) from its television series to create a virtual world for fans to vicariously experience the drama sets and Korean culture.

IP is a term widely used in the entertainment industry to describe a concept, theme, characters or other elements that can be adapted into other types of entertainment formats.

The in-house production company formed a partnership with LG U+ and the Korea Tourism Organization (KTO) to release a total of nine virtual reality (VR) offerings based on series such as “Vincenzo,” “Hometown Cha-Cha-Cha” and now-airing “Inspector Joy” on LG U+’s latest XR platform U+DIVE. The app, released earlier this month, was launched to allow people to “dive” into extended reality (XR) experience. XR includes VR, augmented reality and mixed reality (MR) content.

Actors Kwak Dong-yeon, Lee Sang-yi and Ok Taek-yeon, who star in the aforementioned series, will act as guides to introduce a variety of local culture and settings that have become tourism hotspots since the end of the popular series. With Kwak, the fans can visit Seoul, the capital of the country, with Lee, they can visit the southern port city of Pohang where “Hometown” was filmed and with Ok, they can vicariously experience traditional Korean culture such as food and hanbok. The actors filmed the VR content while filming the series. According to the studio, the content is comprehensible enough for any user interested in Korean culture even if they have not seen the series.

The content based on “Hometown” is scheduled for release on Nov. 24, with “Vincenzo” and “Inspector Joy” content to be released next month. The content will be available with subtitles in five languages including English, Japanese and Chinese. In line with the release of the VR content, the KTO will also release videos introducing special tours across Korea on its website www.visitkorea.or.kr.

“We’re happy to introduce the main tourism spots of Korea which have been beautifully depicted in drama series,” said Chae Ji-tak, a licensing and business manager at Studio Dragon in a press statement. “I hope it can be an enjoyable experience for local and foreign viewers living overseas who cannot travel freely in the era of the global pandemic.”