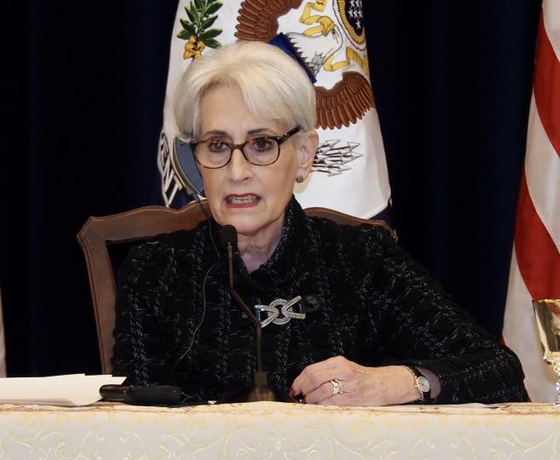 U.S. Deputy Secretary of State Wendy Sherman speaks solo at a press conference in Washington Wednesday in what should have been a joint event with her Korean and Japanese counterparts. [YONHAP]

U.S. Deputy Secretary of State Wendy Sherman ended up holding a solo press conference Wednesday after her Korean and Japanese counterparts pulled out over the Dokdo Islets territorial dispute.

The talks took place. But Mori boycotted the press briefing at the last minute after his government lodged a strong protest over a visit this week by Korea's police commissioner general to the Dokdo islets in the East Sea, called Takeshima by Tokyo.

Choi agreed that Sherman should do the press conference alone.

As Sherman faced the press on her own, she said, "As has been the case for some time, there are some bilateral differences between Japan and the Republic of Korea that are continuing to be resolved, and one of those differences which is unrelated to today's meeting has led to the change in format for today's press availability."

She didn't go into details.

Soon after, Choi told reporters at the Korean embassy in Washington that the Japanese side made known its decision not to take part in the joint news conference just before the start of the trilateral talks. The sticking point was a visit to Dokdo by Korean National Police Agency Commissioner General Kim Chang-yong Tuesday.

"We agreed with the United States, the host of the trilateral talks, to announce the outcome of the Korea-U.S.-Japan vice ministerial meeting through a solo press conference," said Choi, "recognizing the importance" of the three-way discussions.

Japanese Chief Cabinet Secretary Hirokazu Matsuno said in a press briefing Wednesday that Tokyo couldn't "accept" the circumstances and determined that it was "inappropriate to hold a joint press conference."

Seoul maintains that there is no territorial dispute with Tokyo as its easternmost Dokdo islets are historically, geographically and under international law an integral part of Korean territory.

Kim visited Dokdo Tuesday by helicopter for an inspection and to convey words of encouragement to officers guarding the islets, the first such visit in 12 years by the head of the national police agency.

The Japanese government later that day lodged a strong protest to Korea.

Police said the visit was initially meant to be unpublicized but was leaked to the press Monday.

Seoul and Tokyo's frayed bilateral relations threaten the Joe Biden administration's hope for stronger three-way cooperation in light of China's assertiveness in the region and to counter North Korean threats. Seoul and Tokyo are also involved in historical disputes over the Japanese military's wartime sexual slavery and the issue of compensation of forced laborers during Japan's 1910-45 colonial rule, and an ongoing trade spat.

It is rare for Tokyo to react so extremely to the Dokdo issue in the conduct of multilateral diplomacy.

A Korean government official said that Mori almost didn't board the plane for the trilateral talks because of the backlash in Japan over the Dokdo visit.

Diplomatic sources indicated Tokyo may be taking a stronger stance because the Dokdo visit occurred soon after the inauguration of new Japanese Prime Minister Fumio Kishida, a former foreign minister.

Kang Hee-rak, chief of the Korean National Police Agency, visited Dokdo in October 2009, but Japan's Democratic Party was in power and Seoul had good bilateral relations with the Yukio Hatoyama administration.

Tokyo protested strongly when former Korean President Lee Myung-bak visited Dokdo in August 2012. It recalled Japan's ambassador to Seoul, and Japanese politicians demanded the Dokdo issue be raised with the International Court of Justice (ICJ). Bilateral relations took a turn for the worse, and Japan has taken a more hawkish stance on territorial disputes since the launch of the Shinzo Abe administration in 2012.

A senior Blue House official told reporters in Seoul Wednesday that Mori's refusal to take part in the press conference over the Dokdo issue, "If that really is the case, it is very unusual."

Choi and Mori held bilateral talks earlier Wednesday, the first high-level bilateral exchange since the launch of the Kishida administration. In the talks, Choi explained Seoul's stance on the so-called comfort women issue and on Japan's export restrictions on Korea, while making clear Tokyo's claims over Dokdo "will not be accepted." 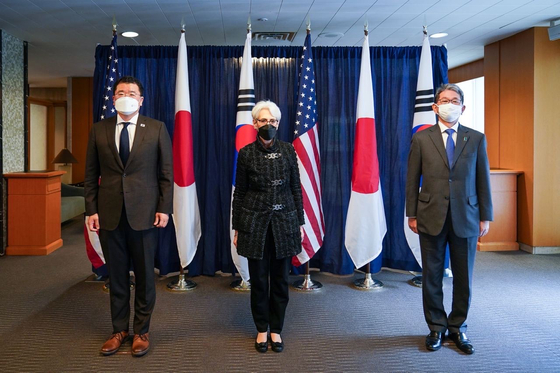 Washington is no stranger to trying to patch up relations between its feuding Asian allies, and frayed Seoul-Tokyo relations are again proving to be the weakest link in Biden's hopes for trilateral cooperation.

Nonetheless, Sherman said the three-way talks Wednesday with Choi and Mori were "friendly, constructive, substantive" and covered a wide range of issues over three hours.

Remarking on the status of Seoul's proposal for an end-of-war declaration, Sherman said, "The United States is very satisfied with the consultations we are having both with the Republic of Korea and with Japan, and with other allies and partners, on the best way forward to ensure the complete denuclearization of the Korean Peninsula. And I look forward to those continued consultations."

The Moon Jae-in administration has in recent weeks renewed its push for some kind of formal end to the three-year Korean War, which ended in July 1953 with an armistice agreement rather than a peace treaty. However, U.S. National Security Adviser Jake Sullivan said late last month that Seoul and Washington may differ "on the precise sequence or timing or conditions" for an end-of-war declaration. Japan has reportedly been reluctant to support the end-of-war plan.

When asked whether Seoul and Washington have resolved such differences, Sherman replied that "whenever we all consult and coordinate with each other, we always come out with a good result that ensures the interests of each of our countries and the overall interest of the world in peace and security."

However, Sherman stressed that the three countries "all agree that we need to stay compliant with UN Security Council resolutions that impose sanctions on North Korea for launching missiles that it should not."

In the meeting, Sherman discussed opportunities for trilateral cooperation on a range of global issues, including the climate crisis, global health security and Covid-19 response, the resiliency and security of critical supply chains, and the shared commitment to human rights and democratic values, said the U.S. State Department in a statement.

She also highlighted close coordination with Seoul and Tokyo to "work toward the complete denuclearization of the Korean Peninsula" and the intent to address the threat posed by the North's nuclear and ballistic missile programs.

The three diplomats also "emphasized the importance of cooperation in the Indo-Pacific region, including through multilateral partnerships that advance our shared prosperity, security, and values."

Sherman said she discussed with the Seoul and Tokyo envoys "the importance of respecting international law in the Indo-Pacific, including maintaining freedom of navigation in overflight in the South China Sea and the East Sea, and of preserving peace and stability in the Taiwan Strait."