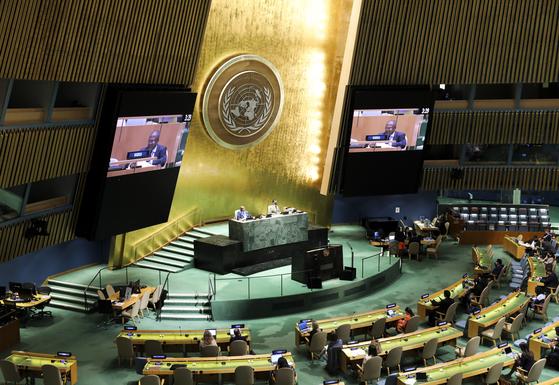 Photo taken on Sept. 30 shows a scene of the general debate of the Third Committee of the United Nations General Assembly at the UN headquarters in New York. [XINHUA/WANG YING]

The United Nations adopted a resolution Wednesday condemning North Korea’s “long-standing” and “systematic” violations of human rights for the 17th year in a row.

The resolution was approved by the UN General Assembly Third Committee, which deals with social, humanitarian and cultural issues by consensus, meaning that all member states agreed to adopt the text of the resolution without taking a vote.

The resolution was similar those adopted yearly since 2005, addressing “gross” human rights violations in the North including torture and other inhuman punishments of its citizens, existence of political prison camps, all forms of sexual and gender-based violence, abductions of North Koreans and international citizens, severe restrictions on freedom of thought of North Koreans in the online and offline spaces, as well as exploitation of workers sent abroad.

Where it differed from previous resolutions was in the mention of Covid-19 vaccines.

The resolution urged North Korea to “cooperate with the Covid-19 Vaccine Global Access (Covax) Facility and relevant bodies to ensure the timely delivery and distribution of Covid-19 vaccines.”

North Korea rejected the offer of nearly 3 million doses of Sinovac vaccine from Covax in September. According to the World Health Organization, no vaccines have been administered in North Korea. In recent talks among nuclear envoys and high-ranking officials, Washington and Seoul have floated the idea of vaccine support for the North, though no official offers have been reported.

Also new to this year's resolution was a call to all UN members to engage with the Office of the UN High Commissioner for Human Rights to develop strategies on how to hold human rights violators in North Korea accountable in the future, including through “investigation and prosecution of persons suspected of committing international crimes in the Democratic People’s Republic of Korea [DPRK], in accordance with international law.”

The resolution also mentioned for the first time prisoners of war from the 1950-53 Korean War, noting with concern allegations of “continued violations of the human rights of unrepatriated prisoners of war and their descendants.”

The resolution was drafted and sponsored by 60 countries including European Union members Austria, Denmark, France, Italy and Slovenia, and also Britain, Canada, Japan, Switzerland and the United States.

South Korea was not a co-sponsor of the report, which was the third year in a row it didn’t participate in drafting the resolution.

“The South Korean government maintains the stance that it will continue to work together with the international community to improve the human rights situation of North Koreans,” said the Ministry of Foreign Affairs in a statement Thursday.

The North Korean representative at the United Nations on Wednesday rejected the draft of the resolution, stating that “texts that target specific countries are typical examples of politicization and double standards,” according to the UN.

His statement was supported by representatives of China, Russia, Syria and Iran during a committee session to discuss the resolution before it was approved by consensus.

The resolution will be introduced at the UN General Assembly plenary for final passage next month.