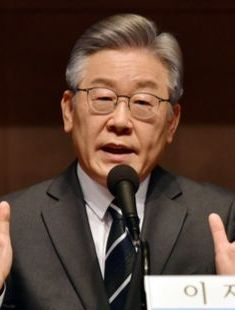 
Ruling Democratic Party (DP) presidential candidate Lee Jae-myung said Wednesday that he "has no choice but to strongly request an independent counsel probe," as demanded by the main opposition People Power Party with regards to the Daejang-dong development corruption scandal.

Lee said in an interview with News1 on Thursday that his request for an independent counsel probe aims to “make a clean break” from the allegations concerning his connection with the development project in Seongnam, Gyeonggi.

The former Gyeonggi governor and Seongnam mayor, under whose watch the city development project was launched in 2015, said that although the mid-investigation results of the state prosecution service’s probe into the corruption allegations will soon come out, he is left with few alternatives other than an independent counsel probe to clear the allegations ahead of the presidential race next March.

This is the first time that Lee has clearly expressed his willingness to introduce an independent counsel probe to look into the Daejang-dong scandal without strings attached.

At a Nov. 10 open debate forum hosted by the journalist association Gwanhun Club at the Seoul Press Center in Jung District, central Seoul, Lee said that an independent counsel probe would be necessary if unanswered suspicions remain after the current probe being conducted by the state prosecution service — signaling only his conditional acceptance of a special probe.

Lee further argued that his record as Seongnam’s mayor was unblemished by “any spot of corruption,” saying that to be corrupt during the administrations of conservative presidents Lee Myung-bak and Park Geun-hye, whose terms overlapped with his mayoralty, would have been politically fatal.

“I was not corrupt, just in order to survive politically and fight,” Lee said.

Suspicions over the Daejang-dong development center on a previously little known asset management company called Hwacheon Daeyu, whose owner and former journalist Kim Man-bae interviewed Lee in 2014, back when Lee was Seongnam’s mayor.

Hwacheon Daeyu joined the 1.15-trillion-won ($981 million) project to develop a space of 968,890 square meters (239 acres) in Daejang-dong in Seongnam and allegedly raked in profits of 57.7 billion won in the past three years since 2019 with an investment of 49.95 million won — a 1 percent stake in the mixed public-private development consortium.

When he was mayor, Lee supported the Daejang-dong development project, which he said would create housing for 5,903 families.

The arrest of Kim and Yoo Dong-gyu, a former aide to Lee who supported the DP presidential candidate’s mayoral and gubernatorial campaigns and also served as the Seongnam Development Corporation’s former acting president at the time that the Daejang-dong project was set up, has put the spotlight on Lee’s role in the development’s profit distribution scheme.

While Lee has claimed that his only fault in the Daejang-dong corruption scandal was relying on the wrong people to oversee the project, this has not stopped the PPP from demanding an independent counsel probe, which the party has proposed for legislative consideration since September, when the news of Hwacheon Daeyu’s outsized profits first broke.