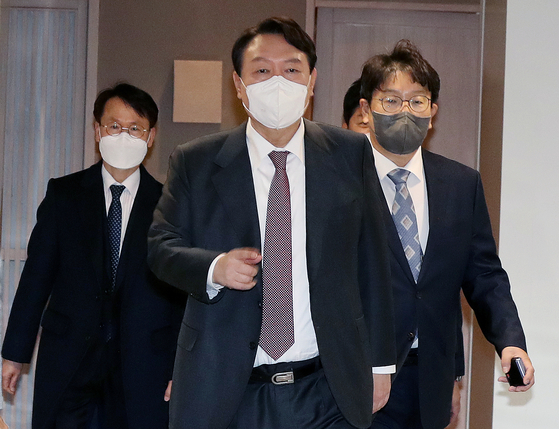 
Kwon Seong-dong, a four-term lawmaker who served as the chief of staff for presidential candidate Yoon Seok-youl, was officially appointed as the main opposition People Power Party's (PPP) secretary-general on Thursday.

As a result, Kwon, who was appointed by Yoon to serve as the candidate's chief of staff on Nov. 8, will switch posts within a mere 10 days.

During the council meeting at the National Assembly where Kwon's appointment was announced, Lee thanked Han for running party affairs. Lee also called for self-reflection within the party, in a potential sign of wariness that the PPP has become overly confident as a result of recent polls that show Yoon leading among other presidential candidates.

"Our candidate's competitiveness in various polls remains very high,” Lee said, before adding, “I hope everyone will focus on the goal of changing the government without too much excitement.”

Lee also pointed out the PPP’s current approval rating, which is higher than that of the Democratic Party, calls for a stance of greater humility and caution if the party is to be successful in its aim of taking the Blue House in March.

The party leader also hinted that the PPP would pay greater attention to the southwestern Honam region, which includes Gwangju and North and South Jeolla provinces, where the party has traditionally been weak in securing votes.

“Discussions are underway to launch a senior election committee," Lee said, adding, "We are preparing to directly reach out in a new way to Jeolla residents, who have been showing signs of high approval of candidate Yoon.”