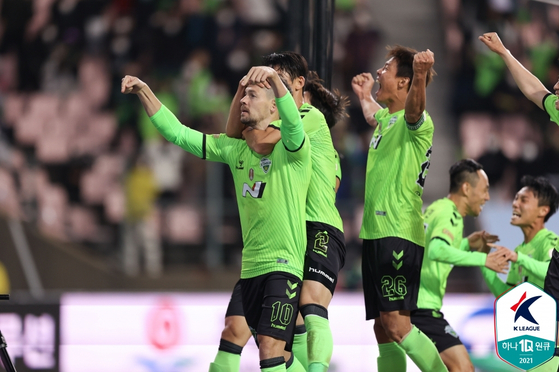 
K League 1 is back in action this weekend after a two-week hiatus while the Taeguk Warriors played two qualifiers for the 2022 Qatar World Cup.

Jeonbuk Hyundai Motors top the standings with 70 points, one win ahead of Ulsan Hyundai. Jeonbuk's 3-2 victory against Ulsan on Nov. 6 gave them the three-point lead. The top two clubs had headed into the big showdown tied at 67 points at the top of the league to play each other for the last time this season. The North Jeolla side edged out the North Gyeongsang side for a tight win.

Jeonbuk have the most wins in the top league, having won eight championship titles in the last 12 seasons — including last year. In 2012 and 2016, Jeonbuk finished runner-up. The club won the FA Cup four times, including last year, and also won the AFC Champions League title twice, in 2009 and 2016.

However, Jeonbuk were not their usual selves toward the middle of the season. Although they started out the season on top and stayed undefeated for 13 matches, after the K League games were postponed in May due to Covid-19 outbreaks, the Suwon Samsung Bluewings snapped their undefeated streak with a big 3-1 win. It was after that loss that Jeonbuk started to wobble, dropping the next two games and then tying with the lower-ranked Incheon United. Jeonbuk tumbled down to third in the standings in the third week of May, then to fourth place by the end of May.

While Jeonbuk struggled to find their form, Ulsan took the top spot. Ulsan were undefeated for their first nine matches until the Bluewings snapped their streak, taking a 3-0 win. But unlike Jeonbuk, Ulsan were undeterred, bouncing right back with a win against Gwangju FC then again against the Pohang Steelers and Jeju United in May to top the standings.

Despite taking a 5-2 defeat against Suwon FC in July, Ulsan stayed on good form, winning all K League 1 matches in August. But the previous few weeks have been challenging for the Northern Gyeongsang club, after missing out on what could have been a historic triple: reaching the quarterfinals in the AFC Champions League, the semifinals in the FA Cup and leading the K League without a serious contender.

The Champions League portion of the triple bid fell apart in October when the Steelers beat Ulsan in the quarterfinals. The double bid was then ruined after Ulsan took a devastating 2-1 loss against the K League 2 side Jeonnam Dragons. Ulsan then took another loss to Seongnam on Oct. 24, allowing their biggest rivals Jeonbuk to share the lead.

In the latter half of the K League 1, second-to-last and last — Gangwon FC and Gwangju FC — are fighting to avoid relegation.


The K League 2 club that will compete in that match has already been determined through a series of earlier playoffs, with Daejeon Hana Citizen emerging victorious against Anyang FC on Nov. 7 to advance to face the second-to-last K League 1 club. Daejeon will face the club twice, home and away, in December as they look for a chance to return to the top tier after seven seasons in the K League 2. 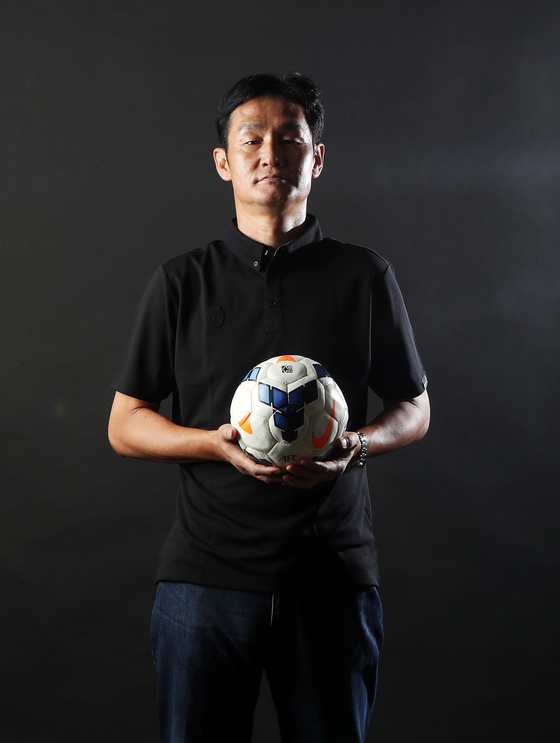 
With potential relegation looming, Gangwon made the decision to sack head coach Kim Byung-soo on Nov. 4 after an unsuccessful season. Kim has been with Gangwon since August, 2018. On Thursday, Gangwon announced that former national team striker and ex-head coach of FC Seoul, Choi Yong-soo, will be taking the helm for Gangwon. The new head coach has only two matches to show what he's got and try to save the club from being relegated to the second division league.

Gangwon will play their first match with Choi as head coach on Nov. 28 against Choi's previous club, FC Seoul. Jeonbuk will face Suwon FC and Ulsan will face Jeju United on Sunday. Ulsan will need to win Sunday’s match in order to keep up with the North Jeolla side, as not much time remains on the schedule.