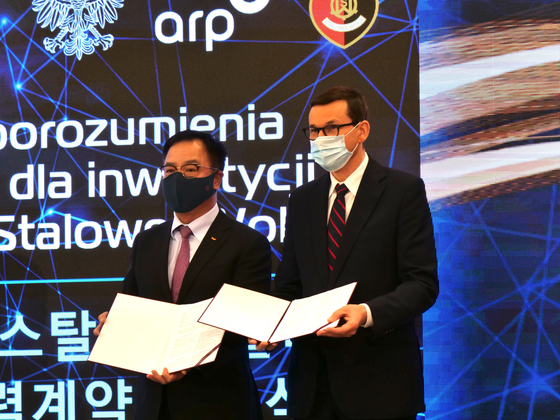 Lee Wan-jae, left, CEO of SKC, and Mateusz Morawiecki, prime minister of Poland, sign an investment agreement to construct a copper foil facility in a government-led industrial complex in the city of Stalowa Wola. SKC is investing 900 billion won ($760 million) to build a plant that will have an annual capacity of 50,000 tons. [SKC]

SKC and wholly-owned SK Nexilis, a copper foil manufacturer, on Thursday signed an agreement with the Polish government to construct a plant in a state-run e-mobility industrial complex in the south-eastern city of Stalowa Wola. The plant will have an annual production capacity of 50,000 tons. Ground will be broken in the first half of next year, with the goal of starting operation as early as 2024.

Copper foil is a core component in making anodes, which are used in making lithium-ion batteries for EVs. They function as the negative pole, which lithium ions flow toward from the positive pole as the battery releases electricity. Around 35 kilograms to 40 kilograms of copper foil is required to make an EV.

With the fast-growing EV market, the market for copper foil will grow 44 percent annually and reach 14.3 trillion won in 2025, according to data by market tracker SNE Research. SK Nexilis has the largest market share in the world’s copper foil market, it said.

The investment is in line with the company’s efforts to expand its market presence in Europe. Poland would allow for access to clients, as four major EV battery makers have their factories either in Poland or nearby, SKC said. LG Energy Solution operates a factory in Poland, while SK Innovation and Samsung SDI have their plants in neighboring Hungary.

SKC aims to increase the annual capacity in Europe to 100,000 tons.

The plant will be SKC’s second overseas copper foil manufacturing facility since it started constructing one in Kota Kinabalu, Malaysia in July. The Malaysian factory, which is currently under construction, will start operation in 2023 with an annual capacity of 50,000 tons.

SKC also said it is considering building another plant in the United States, which will also have an annual capacity of 50,000 tons.

“The company has been accelerating the construction of domestic plants, as well as in those overseas, in order to respond to the growing copper foil demand,” said a spokesperson for SKC. “We will endeavor to build facilities that have world’s best technologies in Europe, in which demand is high.”

The company currently owns four copper foil factories in Jeongeup, North Jeolla, and has been constructing fifth and sixth facilities, which will boost its capacity to 52,000 tons per year.