Airport for Machu Picchu being built by Koreans

Airport for Machu Picchu being built by Koreans 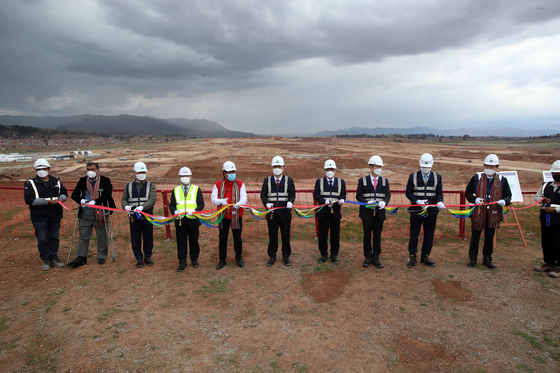 Government officials and executives attend a tape-cutting ceremony for the construction of an international airport in Chinchero in Peru on Friday. [YONHAP]

Ground was broken Friday on a new international airport in Chinchero, Peru, which is being built mainly by Korean companies.

The airport will act as a gateway to Machu Picchu, the Incan citadel visited by many tourists.

A consortium led by the Korea Airports Corporation will participate in the 760-billion-won ($640-million) project as Project Management Office or PMO, which oversees the general progress of the project.

This consortium, which is dubbed Team Korea, was selected as PMO of the project in 2019.

Early this year, two consortiums led by Korea’s Hyundai Engineering and Construction (E&C) were selected to develop the site and actual construction of the airport including runways, terminals and parking lots.

The Chinchero airport will be located 58 kilometers east of Machu Picchu and will include a 4-kilometer runway and a 47,000 square meter terminal.

The airport, which is expected to open in 2025, will be able to accommodate 13 airplanes at a time and 5.7 million visitors annually.
It is expected to boost tourism to Machu Picchu.

Peru has been trying to build an airport in Chinchero since 1978.

At the groundbreaking ceremony, Jean Paul Benavente Garcia, governor of the city of Cusco, said an airport for Chinchero has been longed for for 40 years.

The airport will lead to greater development for Peru, he said.

Construction of the Chinchero airport also means a lot to Korea.

Overseas airport construction is considered one of three major infrastructure markets globally, along with railways and roads.

The Chinchero airport project can serve as an opportunity for Korean companies to market their technology and project management capacity to the world.

“We feel extremely proud that connections between Machu Picchu and the world will be built using Korea’s technology,” said Son Chang-wan, CEO of Korea Airports Corporation.

“By sharing technology on safe construction and operation of airports and managing the project successfully, the corporation will advance further to global business including the South American region.”