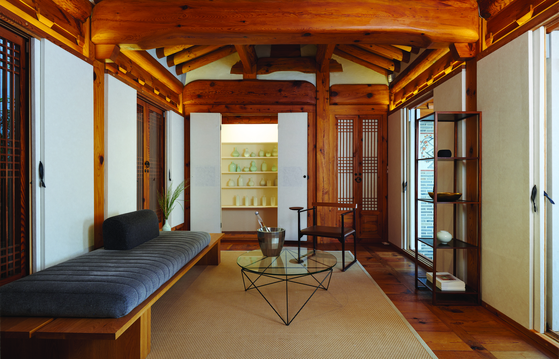 
Interior design fanatics in Korea are ardent fans of Arumjigi, which sells modern versions of traditional Korean items. Some of the most popular items include the Korean modern boryo, a versatile traditional Korean mattress that was widely used in traditional homes, and ceramics used for jesa, or ancestral rituals.

Arumjigi is not merely a platform for shopping attractive traditional items. It was founded in 2001 as a nonprofit foundation to protect and preserve traditional Korean culture. Its full name is Arumjigi Culture Keepers Foundation. 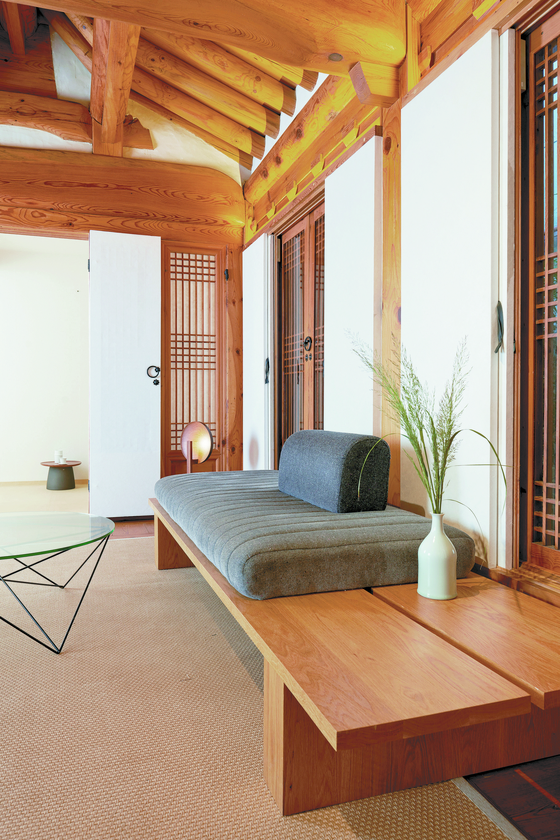 Korean modern ,boryo, a versatile traditional Korean mattress that was widely used in traditional homes, exhibited inside the hanok at Arumjigi's headquarters. [ARUMJIGI]


To celebrate its 20th anniversary this year, Arumjigi decided to hold a special exhibition at its headquarters in Tongeui-dong and its hanok (traditional Korean house) in Anguk, both in Jongno District, central Seoul.

The exhibition titled “Home Coming” displays some of the highlights of Arumjigi’s previous 18 exhibitions, which have been organized since 2004.

A group of researchers, scholars and artisans who are dedicated to the preservation of traditional Korean culture are taking part in this celebratory exhibition. They include artists like Kwon Dae-sup and Bahk Jong-sun, fashion designers Im Seon-oc and Jin Teok, as well as researchers from Arumjigi’s traditional culture research institute called Onjium. (Arumjigi opened a restaurant of the same name, which offers recipes from the past in a modern setting.)

“We attempt to showcase the landscapes of life with restraint, natural beauty and elegance,” said an official from the foundation. “The exhibition will very well show the outcomes of Arumjigi’s 20 years of research to modernize clothing, food and living culture to creatively succeed Korea’s forgotten traditional culture.” 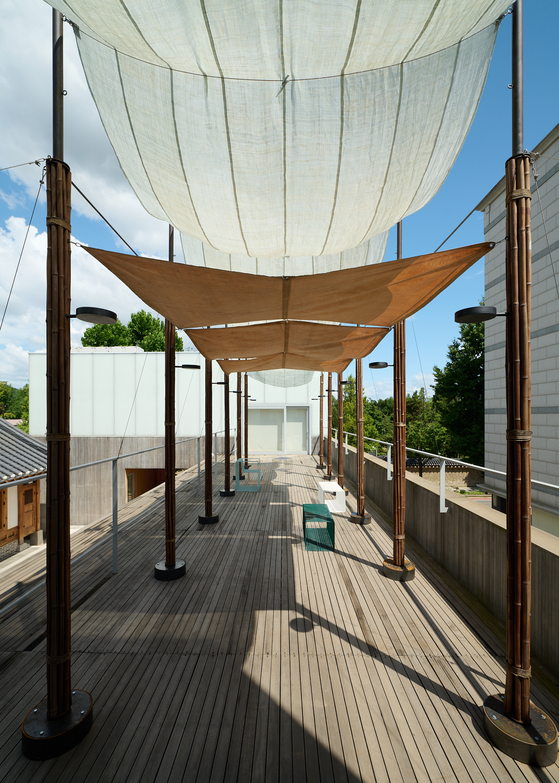 ″Shaded Road,″ is installed on the wooden deck walkway of the third floor. [ARUMJIGI]


Arumjigi’s first project in 2001 was to clean up the unkempt areas around old trees in a small town in the countryside. It then moved on to refurbishing Seoul’s five palaces and Jongmyo Shrine, brushing off dust and repairing old information boards. It also initiated the Palace Restoration Project and restored Hamnyeongjeon Hall in Deoksu Palace.

According to Arumjigi, it picked Hamnyeongjeon Hall as its first project as it is known to be the last residence of Emperor Gojong (1852-1919). The restoration process included repainting inside walls, changing the floor material and installing shades known as muryeomja, which are the equivalent to the Western concept of curtains.

“Recreating muryeomja marked a new precedent as it was the first time that a historical item, only known by literature, was revived,” said Shin Yun-gyun, the foundation’s chair.

In 2004, Arumjigi started to organize exhibitions under a rotation of three themes — food, clothing, and shelter. So far, it has organized 18 exhibitions. After creating a hanok on the second floor of a contemporary office building, which was a shock to many people especially architects, Arumjigi began to actively collaborate with artisans and designers from different areas to organize the exhibitions and showcase the works inside this traditional Korean building. Its only goal was to make traditional culture more appealing to modern people so that tradition can naturally permeate into their lives.

“Home Coming” compiles the highlights of the previous exhibits on all three themes. There are around 250 works by researchers and artists.

“If the past 20 years of Arumjigi has been a trial period to understand traditional culture and build confidence, the next 20 years will be the time to think about how to make it sustainable and how to spread the beauty of traditional culture to as many people as possible,” Shin said during the opening ceremony of the exhibit early this month. 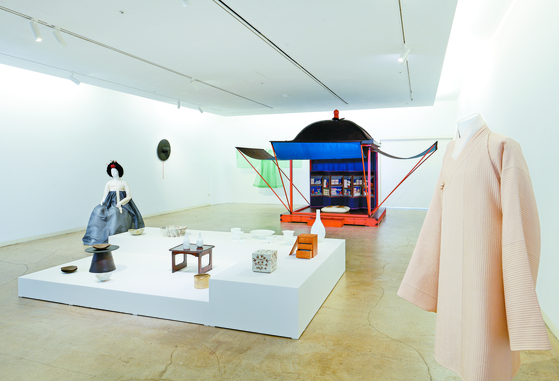 The "Welcome" section of Arumjigi's "Home Coming" exhibit at its headquarters in Tongui-dong, central Seoul. [ARUMJIGI]


At Arumjigi’s Tongeui-dong headquarters, the exhibit starts off on the first floor with a display of reinterpreted traditional Korean clothing for men and women. Two mannequins donned in women’s chimajeogori, or traditional Korean dress, and men’s Joseon Dynasty (1392-1910) clothing welcome visitors.

In the center, there’s a traditional tea table, juansang (a table set with liquor and side dishes) and a lunch box. They are reproductions of traditional versions with a modern twist. A reproduced turquoise dopo (coat) worn by King Yeongjo (1724-76) is also on display in this section of “Welcoming.”

Those unfamiliar with Joseon traditions will be drawn to the makcha, or a traditional royal tent, which is also on the first floor. In the Joseon Dynasty, a temporary tent was set up for the king, the crown prince or high ranking officials to stay in during ceremonies or while traveling.

On the second floor, which houses an open-air courtyard and a hanok, the “Vitality” section welcomes visitors. This section allows visitors to witness how Koreans in the Joseon Dynasty traditionally set up tents and canopies to avoid the sun and the rain. Arumjigi worked with local architects to showcase various traditional methods of creating shade with modern touches, as well as new designs that were inspired by traditional methods. 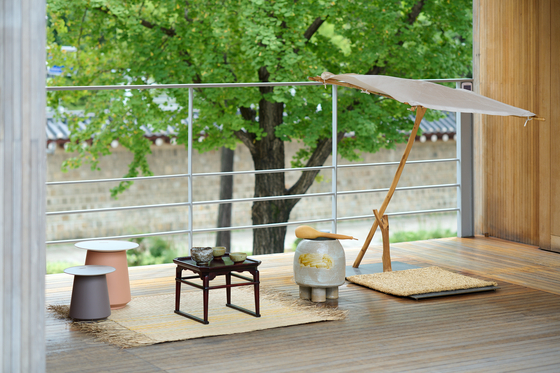 A portable shade canopy for one person on display on the second floor of Arumjigi's headquarters. [ARUMJIGI]


To recreate the traditional canopies, Arumjigi said its researchers tried to stay true to the “Painting of Feast at Bongsudang” (1795). The painting shows that the royal tent had a vaulted roof, pillars without walls and a flat floor. The drapes on all four sides can be raised by supports.

A portable canopy for one person is also on display. In an 18th-century genre painting titled “Pictorial Records of Travel,” there’s an illustration of a scholar sitting down underneath a similar canopy made from wood and fabric. Arumjigi's research institute Onjium says it tried to revive the original look, making it very easy to assemble and disassemble. 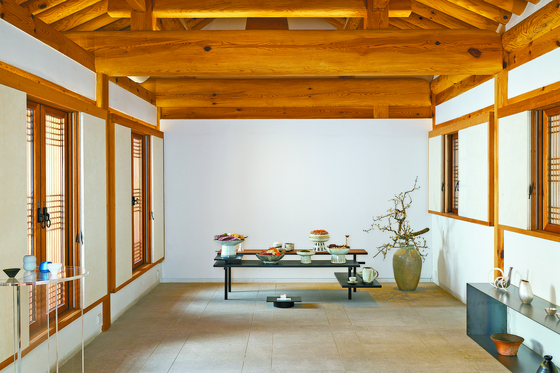 
A modern jesa table, which Arumjigi showcased in 2019, is set up in one of the rooms of the hanok. The tradition of jesa has been slowly dying out in many modern Korean homes as women are usually forced to undertake the brunt of the work, which involves cooking as many as 30 different dishes.

To revive the essence of jesa, Arumjigi created a contemporary version with only six dishes. It is also where artists’ ceramics are on display, stealing the hearts of those who just can’t have enough plates.

On the third floor, different interior craftworks like lamps and side tables, as well as chail (an awning that was devised to block the sun in traditional Korean architecture), are on display. This section is titled “Temperature of Staying.”

Arumjigi said visitors in this section can fully appreciate the beauty of staying put and enjoying nature in an hanok. 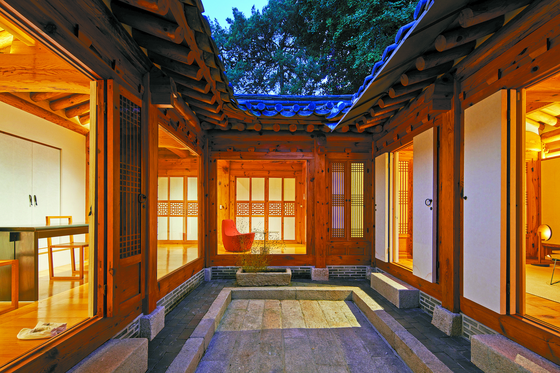 
Those who hope to live in a hanok should make a stop at Arumjigi’s hanok in Anguk. It feels like walking into a real hanok home, filled with furniture and interior decor.

Lee O-young, former culture minister, said during the exhibition’s opening ceremony that “those servants of King Jeongjo (1752-1800), who were trying to make Suwon Hwaseong fortress more beautiful, asked the king, ‘Isn’t it enough if the castle is strong? Should it be beautiful as well?’ Then King Jeongjo said, ‘You fools, making something strong is not powerful, but beauty is.’”

“That’s what beauty is,” Lee continued. “It’s the strength of our culture.”

Tickets for the exhibition at Arumjigi’s Tongeui-dong headquarters cost 10,000 won ($8.50). The hanok in Anguk is free of charge to enter. Both exhibitions run until Dec. 5.

Growth next year will be 3.2%, says KCMI