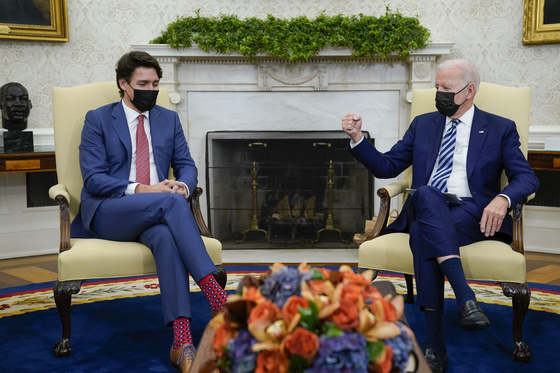 U.S. President Joe Biden, right, in a meeting with Canadian Prime Minister Justin Trudeau in the White House in Washington Thursday confirms that the United States is considering a diplomatic boycott of the 2022 Beijing Olympics. [AP/YONHAP]


The United States and Britain are mulling diplomatic boycotts of the Beijing Olympics next February, which could be a setback to South Korea's plans to engage North Korea at the Winter Games.

The Moon Jae-in government has been working with the United States to find a way to get North Korea to return to denuclearization negotiations. The Beijing Olympics has been considered a possible venue for key players to come together to restart engagement with the North.

But U.S. President Joe Biden confirmed Thursday for the first time that the United States is considering a diplomatic boycott of the 2022 Winter Olympics to hold China accountable for human rights abuses.

During a meeting with Canadian Prime Minister Justin Trudeau at the White House Thursday, Biden told a reporter that a diplomatic boycott of the Olympics was "something we're considering."

Biden's remarks came just days after he held a virtual summit with Chinese President Xi Jinping to try to smooth over Sino-U.S. tensions. Xi was expected to invite Biden to attend the Winter Games, as is customary.

During his summit with Xi, Biden raised concerns about China's abuses in the Xinjiang region, Tibet and Hong Kong, according to the White House, while the Chinese leader warned the United States against supporting Taiwan.

The White House usually sends a delegation to Olympic opening and closing ceremonies.

A diplomatic boycott would mean that U.S. government officials, including Biden, would not attend the Beijing Olympics, though it would not prevent American athletes from competing.

British Prime Minister Boris Johnson also indicated Britain could diplomatically boycott the Games, and if the United States makes a formal announcement, other countries may follow suit. U.S. partners such as Canada and European countries are facing pressure to boycott the Games.

U.S. Secretary of State Antony Blinken told the New York Times last week that the United States was discussing with allies "how they're thinking about participation" in the Olympics.

Time is running out for the Moon administration, with less than half a year in office, to get traction for its peace initiative with the North.

A U.S. diplomatic boycott of the Beijing Olympics would put a damper on such plans, including Seoul's push for a declaration formally proclaiming the end of the 1950-53 Korean War.

In an address to the United Nations General Assembly in September, Moon proposed that the two Koreas, the United States, and possibly China, formally declare an end to the Korean War as a means to get the North to return to dialogue.

The South Korean government has seen the Olympics as an opportunity to get back on track inter-Korean and North-U.S. dialogue, in the spirit of sports diplomacy, reminiscent of the détente on the Korean Peninsula resulting from the 2018 PyeongChang Winter Games.

Sherman in a solo press conference after a trilateral meeting Wednesday said on the end-of-war issue that Washington is "very satisfied with the consultations" with Seoul and Tokyo "on the best way forward to ensure the complete denuclearization of the Korean Peninsula."

Unification Minister Lee In-young said in a forum Friday that Seoul and Washington are "entering a final stage" in their discussions on an end-of-war declaration.

Some analysts think the United States and Britain may stop short of actually following through with a diplomatic boycott in consideration of the Olympic spirit and to avoid worsening relations with China.

Jen Psaki, the White House press secretary, said in a briefing Friday in Washington on a diplomatic boycott "there hasn't been a final decision."