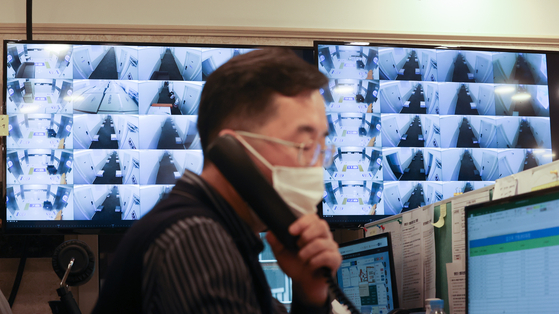 An official answers the phone while monitoring CCTVs at a community treatment center for Covid-19 patients who are asymptomatic or have mild symptoms in Yeongdeungpo District, western Seoul, Sunday. [NEWS1]

As new Covid-19 infections remained in the 3000s for a fifth consecutive day, 804 patients were on standby for hospital beds in the Seoul metropolitan area Sunday.

These patients have been waiting for hospitals beds for more than a day following coronavirus diagnoses, up 145 from the previous day.

After patients on standby for hospital beds hit the triple digits for the first time on Nov. 12, with 116 people, the figure doubled within four days and hit 520 on Friday and 659 on Saturday.

The intensive care unit (ICU) bed occupancy rate nationwide stood at 66.6 percent as of 5 p.m. Saturday, with 376 out of 1,127 beds available, according to the Central Disaster Management Headquarters.

There were 510 newly hospitalized patients, down 140 from the previous day's 650 people.

There are usually fewer tests conducted over the weekend, but there was no sign of a slowdown in Covid-19 infections, with a record high for cases reported on a Sunday.

There were 3,098 domestic infections and 22 imported cases. Of the local transmissions, 80.9 percent were in the metropolitan area, and Seoul reported 1,315 new cases, Gyeonggi 988 and Incheon 203.

There were 30 additional fatalities, bringing the total death toll to 3,274, said the KDCA. They were all elderly people over 60, including 21 in their 80s.

Clusters of infections at nursing homes and linked to students returning to classes and private academies contributed to the recent spike. The cases in nursing home and elderly care facilities are generally breakthrough cases as the effectiveness of Covid-19 vaccines drops after six months. Inoculations are rolling out for teens, and young students mostly are not vaccinated because of their age. 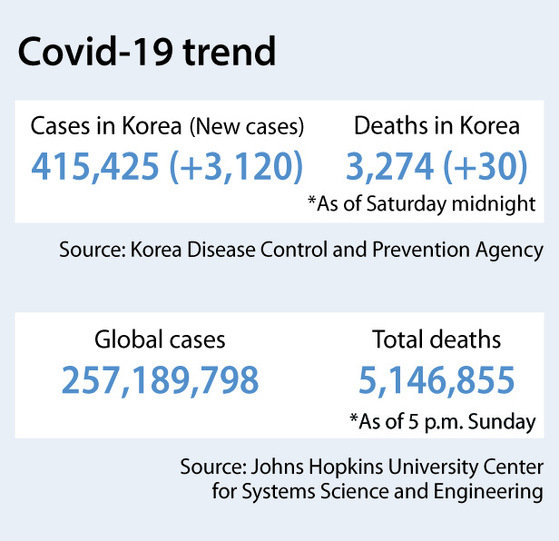 In a psychiatric hospital in Guri, Gyeonggi-do, the first patient was confirmed on Nov. 2, and that has grown to 56 infections including 49 patients. Similarly, a nursing home in Nandong District in Incheon saw a total of 125 infections, including 90 of its patients. These were generally breakthrough cases.

The government warned earlier that if the virus situation worsens and over 75 percent of intensive care beds are occupied, a "circuit breaker" might be necessary for the "With Corona" relaxations of social distancing measures. However, officials say that the situation is not at that point yet.

At the beginning of this month, Korea started the first stage of its three-phase "With Corona" strategy to ease social distancing measures and allow people to return to normal daily life.

Epidemiologists warned that the situation will get worse if the government doesn't immediately come up with plans to procure more beds, possibly creating a hospital exclusively for intensive care patients.

The government is reviewing procuring more hospital beds, with cases not expected to shrink any time soon.

Health authorities plan to issue an administrative order to secure 20 additional beds in general hospitals by early next month.

They also plan to expand a home treatment scheme for patients who are asymptomatic or have mild symptoms.