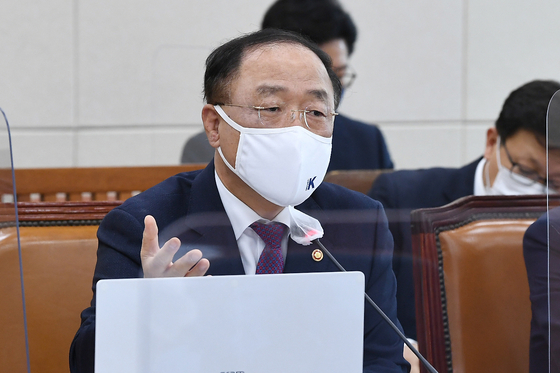 The author is the head of P Team of the JoongAng Ilbo.

In May 2005, government officials had a workshop at Samsung Human Resource Development Center in Yongin, Gyeonggi. The participants were high-level officials from the Ministry of Finance and Economy. “The measures to prevent the credit card crisis, which was hastily implemented after many people became bad creditors, was a typical belated policy,” said a participant.

The remarks came from none other than an official of the Ministry of Finance and Economy. He gave a sharp criticism in front of the deputy prime minister who was willing to listen.

The sense of crisis was heightened as discussions were based on the premise of the collapse of the ministry. The ministry would collapse if it fails to diagnose the economic situation, issue belated policies, lack rationality and transparency in policy-making process, implement reckless policies, ignore markets, public and media opinions or become the Mofia — a compound word of the Ministry of Finance and mafia.

There were many controversies involving the ministry. The most painful criticism is the so-called “Mofia.” The ministry was compared to the mafia as its officials took major positions in the government and state-run banks and wielded unchallenged power. A number of officials were investigated over the allegation that they were involved in the sale of Korea Exchange Bank to American private equity fund Lone Star at a low price during the Asian financial crisis and IMF bailout.

Lately, the Ministry of Strategy and Finance is making news again. This time, it is over the budget. Ruling Democratic Party (DP) presidential candidate Lee Jae-myung proposed to use the surplus tax revenue on additional disaster relief grants for all citizens. The ministry initially showed disapproval, but soon it was attacked after it turned out that an additional 19 trillion won in taxes was collected than what the ministry expected in July. DP floor leader Yoon Ho-joong said that an investigation was necessary if the cover-up was intentional. But presidential runners are expected to continue to offer policy promises to please the voters. I hope they study the failing scenario that the officials had discussed 16 years ago.

Get to the bottom of the favoritism (KOR)