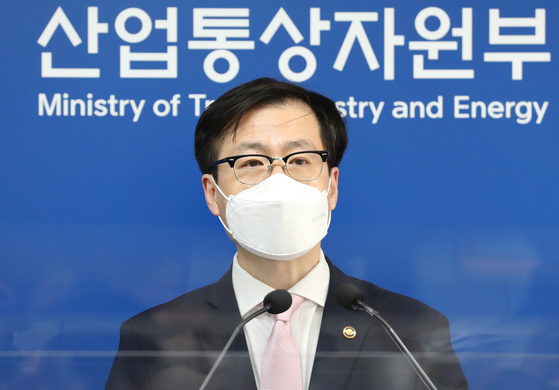 Korean Trade Minister Yeo Han-koo gives a briefing on the meeting with U.S. Trade Representative Katherine Tai on Monday at the government complex in Seoul. [YONHAP]

President Joe Biden announced the framework at the 16th East Asia-Asean Summit held by teleconference in late October. Its exact form and purpose are still vague.

The trade minister said the Korean government will continue to work with the U.S. on the issue as the framework is still in the conceptual stage.

Tai was the first USTR to be visiting Seoul in 10 years as this year marks the 10th anniversary of the free trade agreement between the two countries.

The United States has been pushing strongly to increase cooperation with countries in the Asia-Pacific region, especially at a time when tensions with China have been heightened.

Tai and U.S. Commerce Secretary Gian Raimondo have been touring the region.

In an interview with Bloomberg in Singapore last week, Raimondo said a process for establishing the Indo-Pacific economic partnership will begin early next year.

She said the U.S. has its own plans to step up trade cooperation in the Asia-Pacific region amid China working to increase its influence by joining the Comprehensive and Progressive Trans-Pacific Partnership (Cptpp).

While President Barack Obama was the first to propose such trade pact, the U.S. pulled out under Donald Trump.  Biden’s commerce secretary said the U.S. has no plan to join the Cptpp.

Raimondo said the Indo-Pacific economic partnership was about forming robust relationships in the region and not about China.

The trade minister said the Korean government has asked for a renegotiation on steel tariffs.

In 2017, the U.S. limited the import of steel from Korea under the U.S. Section 232 of the Trade Expansion Act.

Under this rule, tariffs are waived on the import of 70 percent of the average steel shipped from Korea in the three years prior.

The EU and Japan recently negotiated with the U.S. for the 25-percent tariff on steel to be lifted starting 2022.

“There is high demand for high-quality steel products from Korea within the U.S. and there is an increase of investment in the U.S. by Korean manufacturers.”  Minister Yeo said.

Yeo said it was a discrimination against foreign companies including those in Korea.

He passed on the Korean government’s concerns regarding the recent U.S. government demand on Korean companies for information about their semiconductor businesses.