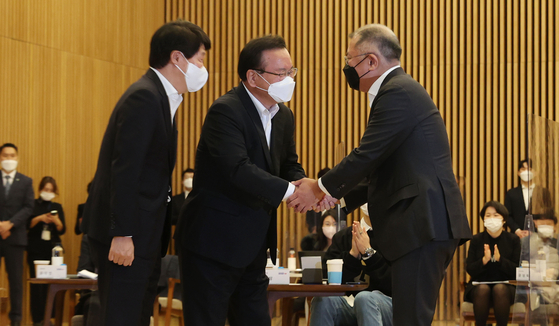 Of the new jobs, 30,000 will be direct hires by the company while the remaining 16,000 positions will be created through government-funded training programs.

The announcement was made during a meeting with Prime Minister Kim Boo-kyum and Labor Minister An Kyung-duk at the automaker’s showroom in Goyang, Gyeonggi.

The jobs will be in future-oriented areas such as urban air mobility (UAM), EVs and robotics.
“As [Hyundai Motor Group] tilts towards the UAM, EV and hydrogen fuel cell businesses, this is the perfect time for the youth to unleash their creativity and endurance,” Chung said during the event.

“We will take care of them and bring out the best of their ability,” he said.

Coming out of the meeting, Chung said the automaker is considering producing EVs in the U.S., but didn't go into specifics.

“The proportion of EVs [we sell] will continue to rise until 2040, and the company is devising plans in line with that direction,” Chung told reporters.

Asked if U.S. production might start next year, he said “No, but we are still planning and discussing the time.”

The carmaker’s announcement was the latest in a series of recruiting plans aligned with a government-funded program called “Youth Hope ON.”

Hyundai’s pledge is the largest among five participating companies – Samsung, LG, SK, Posco and KT -- whose total future recruitment adds up to 179,000 jobs.

In September, Samsung Electronics Vice Chairman Lee Jae-yong pledged to create 30,000 more jobs over three years, in his first public appearance after being released from prison on parole from a prison sentence for bribery.

LG followed suit by signing an agreement to recruit 30,000 new employees over the next three years.
SK Inc. promised to hire 27,000 people over the same period and Posco 25,000. KT announced in September the creation of 12,000 jobs.

The project is led by the prime minister's office, which funds the education fees for job seekers. The partnering company is required to hire more recruits than usual.