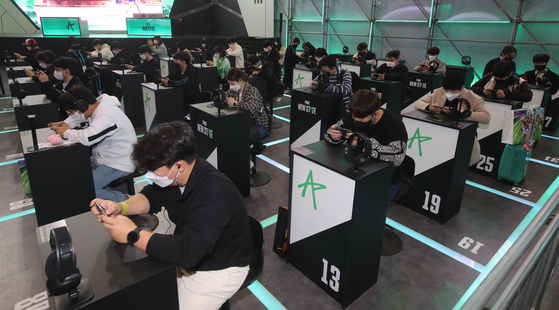 
Non-fungible tokens (NFTs) and blockchain technology are the two defining pillars of next-generation games, but Korean game law prohibiting users from generating profit through their gameplay makes it illegal for Korean companies to implement NFTs in games, experts said during the G-Star game festival last week.

G-Star, Korea’s biggest game exhibition, ended after five days on Sunday evening at Bexco convention center in Busan. It was only attended by 28,000 people on site — 88 percent fewer than in 2019 when the last offline event was held before Covid-19 — but over 960,000 watched on G-Star TV livestream.

A total of 783 companies from 44 countries took part in the business-to-business matching sessions. The exhibition had 1,393 exhibition booths.

Kakao Games and Krafton were in the spotlight as NCSoft, Netmarble and Nexon did not participate this year.

Though smaller in scale in terms of participating companies and visitors, this year’s conference featured the most lectures. Thirty-eight sessions were held on various subjects, including NTF games, metaverse technology, marketing strategies and storytelling methods.

Seven sessions were dedicated to NFTs, blockchain and metaverse, while other speakers also touched on the issues during their lectures. Views greatly differed.

According to Kim, many game companies are announcing plans to create NFTs or blockchain games without presenting any clear ideas on how, or just borrowing the concept to join the trend.

Local game companies, such as NCSoft, Com2us and Gamevil, have recently announced that they will be opting for NFT or blockchain-related games in the near future.

Not many companies have laid out specific plans yet, but WeMade is readying the launch of an in-game trading system for Mir4, its latest online game, where users can buy and sell NFTs of game items starting next month.

“When we released Mir4, there were only two countries where we met with problems: Korea and China,” said Chang Hyun-guk, CEO of WeMAade during a press conference held at Bexco on Thursday.

NFT games are meaningless — or even illegal — in Korea due to the Game Industry Promotion Act, which allows people to spend money on games but not exchange what they’ve made within the game into real cash.

An NFT game allows players earn game items while playing and make real money from them, which is referred to as the play-to-earn (P2E) model. But the law would limit NFTs to stay within the boundaries of the game, taking away the incentives for users to play NFT games.

“We are not asking for immediate approval. But P2E is a trend that cannot be stopped by any government or company.”

It may be difficult to change the status quo, according to Kim Kyu-chul, the chairman of the Game Rating and Administration Committee, which is under the Ministry of Culture.

“It is difficult to make an arbitrary decision on NFT games because the current law has regulations on speculative acts,” Kim said. “They may not be possible under the current game laws.”