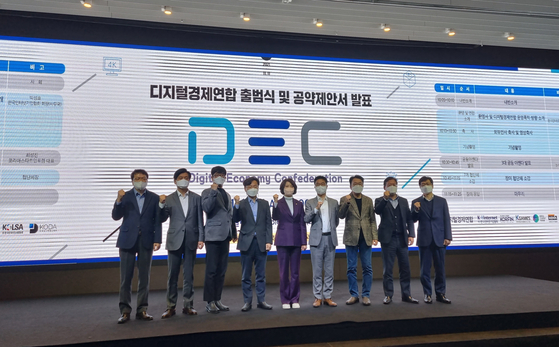 The Digital Economy Confederation (DEC), a coalition of seven internet and tech organizations in Korea, requested the National Assembly not pass the ″online platform act″ in a statement on Monday. [DEC]

A bill regulating these companies was put forward by the government earlier this year. The National Assembly is to vote on it in the coming days.

Platform companies are as defined in the bill are essentially e-commerce companies and online providers of services and their intermediaries. The larger of these have been accused of abuse of power when dealing with smaller and more vulnerable enterprises.

The law will cover companies that make over 10 billion won ($8.4 million) in revenue or have a transaction volume of over 100 billion won annually. They will have to have written contracts with suppliers and disclose information about their algorithms.

It would cover Naver, Kakao and Coupang, and also foreign companies like Google, Apple and Amazon.

Platform companies sign contracts with smaller businesses they host, but not always. The new law is meant to make it compulsory as a way to stop the operators from abusing their power. They will also be required to reveal information about the algorithms and cap fees.

“We ask that the law be discussed thoroughly over time during the next administration,” the Digital Economy Confederation (DEC), a coalition of seven internet and tech organizations in Korea, said in a statement on Monday.

“The constituents of the digital economy have now come to realize the gravity of the problems that have occurred in the digital transition process,” the confederation said.

“The ecosystem is changing for the better, but regulations that lack deep analysis of the real-life situations will not be able to reflect those changes. It is imperative that the law reflects the interests of all parties involved, not just one entity.”

According to a study by Prof. Yoo Byung-joon at Seoul National University’s Business School, the online platform act could potentially decrease platform operator revenue by 1 to 2 trillion won annually and increase their operating costs by 12.5 billion won. That would lead to 1.4 trillion won to 2.8 trillion won in lost GDP, the study said.

The tech industry also argues that companies can be regulated with existing laws, but a new act provides more than just new rules, according to Korea’s antitrust authority.

“There are many loopholes in laws that regulate online platforms,” said Joh Sung-wook, chairperson of the Free Trade Commission (FTC) to parliament last month.

“The current law does not give us grounds upon which we can demand data or probe into their businesses. The online platform act will give us the grounds to protect the 1.8 million businesses brokered on online platforms."

If implemented, the FTC will have jurisdiction over unfair acts by online platform operators against companies they host, while the Korea Communications Commission (KCC) will oversee the treatment of users.