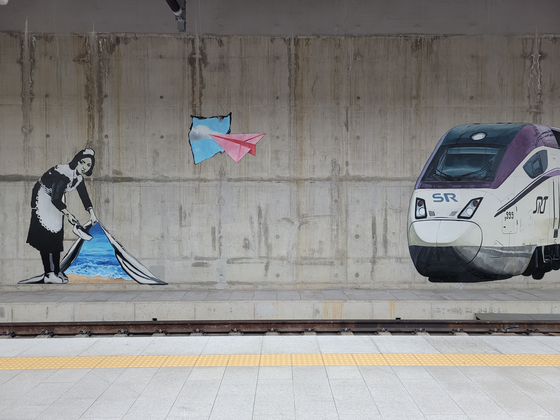 A public mural drawn on the platform of Suseo's SRT station that is causing controversy, with some calling it a cheap imitation of Banksy's “Sweep It Under The Carpet.” [MOON SO-YOUNG]


No amount of Covid-19 could hinder the footsteps of eager art lovers scavenging their way to look for worthy art work to add to their collections.

The organizing committees of local art fairs this year are reporting that they’ve seen the highest, both in terms of sales and the number of visitors, since their founding. The latest art event to wrap up, which was the Daegu Art Fair 2021 that ran from Nov. 5 to 7, had more than 14,000 visitors and a total of 9.8 billion won ($8.2 million) in sales. The sales record is not only their highest, but a massive leap in numbers compared to last year, which saw 3.6 billion won spent due to a scaled-down run of the event because of the pandemic.

Those who weren’t able to get their hands on the art they wanted at the former two events may have hastened their footsteps to Daegu, but for those who were boarding the high-speed railway SRT from Suseo station at platform No. 6, a surprise was waiting for them. The familiar street art “Sweep It Under The Carpet”— a work by British artist Banksy drawn in North London, 2006 — was drawn on the opposite wall of the platform.

Distinctly similar to the original work, the street art drawn in Suseo station also shows a woman dressed as a maid sweeping dirt under the cover of a brick wall. A notable difference is that the broomstick that stood on the left side of the woman is gone, and an SRT train takes its place instead on the right side of the woman. Another change is that instead of a brick wall, the woman is exposing an ocean. 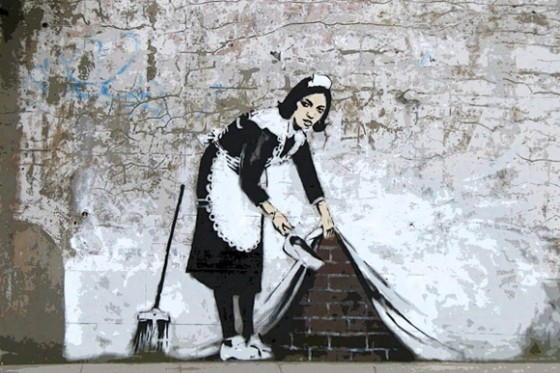 Banksy's “Sweep It Under The Carpet” drawn in North London, 2006. [JOONGANG PHOTO]


This piece of street art is one of few that SR, a quasi-state-run company which operates SRT, installed in May 2020. When the pictures of the piece started to float around social media, a debate arose about whether it was just a form of cheap imitation. Nonetheless, the art remains firmly plastered to the train tunnel to this day.

Can this be referred to as a parody or paying homage to the famous piece by Banksy? The definition of parody in art is to humorously twist the meaning of an original work, whereas paying homage is a show or demonstration of respect or dedication to an artist or their works. Neither of the two definitions apply in this case.

The original piece by Banksy is said to represent the hiding of "the uncomfortable truth or embarrassment in front of others” and was satirically used to point out the reluctance of the Western world in dealing with global issues such as the AIDS epidemic. The woman dressed in the traditional maids uniform seen in European hotels also represents marginalized laborers. If the mural in Suseo station is an homage to Banksy, then it should be functioning the same way that the original work did — wittily depicting, criticizing, or mocking the social situation of Korea.

“This mural, made through talent donation by students in Sejong University's department of painting, will be a good example of the production of social values through collaboration between a public institution and a university,” reads the website of SR.

The mural can be a good example — of what a disaster a public art piece made through the "talent donation" by students can be. In Korea, talent donation refers to free service in certain fields by people who have expertise or skills in those fields. If SR had commissioned professional artists for this mural, and paid them properly, they could have created something other than a Banksy imitation, at least to preserve their own pride.

This kind of project dates back to the Federal Art Project, which was part of the New deal, or a series of policies and programs launched by the U.S. administration of Franklin D. Roosevelt in the 1930s to overcome the Great Depression. The New Deal art program included hiring artists to create murals on post offices and other public property in order to pay them after they were financially devastated by the Depression and give citizens, without time or money to visit art museums, opportunities to enjoy art.

However, even paying artists instead of making use of talent donation, does not guarantee the quality of public murals. With aims very much similar to the New Deal art programs, the Ministry of Culture, Sports and Tourism launched a project dubbed “Our Town Art” (translated) — to provide jobs for artists hit hard by the sluggish economy due to the prolonged Covid-19 pandemic while simultaneously promoting art and culture in regional areas. The project launch last year and quietly wrapped up this summer. A total of 100 billion won was distributed throughout 228 cities, counties and districts to draw public murals. However, a vast majority of the art from this project is raising questions about the the low-quality of the work instead of compliments or praise.

Another mural on the frontline of controversy can be found on the walls of Sinchon town in Yangju, Gyeonggi. The upper part of the mural is a copy of “Jar and Plum Blossoms” (1954) by the modern art virtuoso Kim Whanki (1913-1974) while the lower part strongly reminds viewers of Keith Haring’s (1958-1990) iconic “Dance” series. Even leaving aside disputes regarding plagiarism and piracy, how are moon jars or dancing people in any way even remotely related to the city of Yangju? 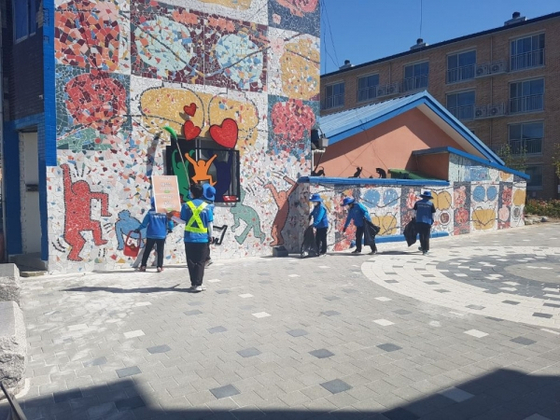 A public mural drawn in Yangju, Gyeonggi as part of Culture Ministry's efforts to offer employment to the artists suffering in the prolonged Covid-19 pandemic. [YANGJU CITY HALL] 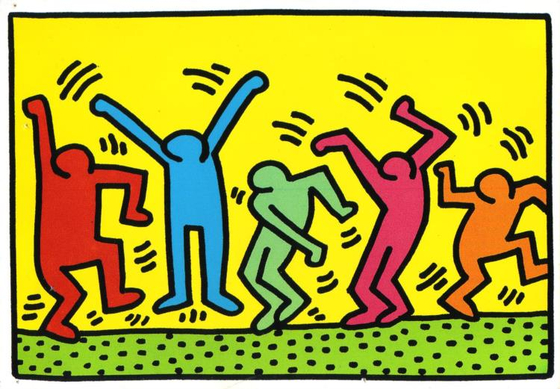 
“I’ve seen quite an abundance of artwork that has stemmed from this project but about 90 percent of it had me shaking my head in disappointment,” art critic Hong Kyung-han, who served as the artistic director of the 2018 Gangwon International Biennale, told the Korea JoongAng Daily.

Hong evaluates that one of the key factors behind why this project failed was due to its haste. The project was originally supposed to start last summer and end in February this year, which is an absurdly tight schedule considering that they needed to plan, gather, and create the murals all in less than a year.

“The crucial elements in creating public art lies not only in its originality or artistic beauty, but also its social linkage to the history and the contemporary situation of the region of which the art is being installed, and moreover, understanding that this project’s purpose is to provide the support that the regional artists need to carry on with their livelihoods,” said Suh Jin-suk, the inaugural director of the Ulsan Museum of Art which is to open on Jan. 6.

The fundamental cause behind the problem also lies in the public’s lack of interest in art in general. Although the local art market couldn’t be more prosperous than it is now — as the 2020 data from Statistics Korea shows — the ratio of people aged 15 and over who have ever visited an art museum or a gallery in the past year was only 13 percent in 2019. The ratio for other museums was 15.7 percent. The percentages are much lower than those in Western countries such as England: According to the UK Department for Digital, Culture, Media, and Sport released in 2019, 50.2 percent of the survey respondents aged 16 years and over in England had visited a museum or gallery in the past year of 2018-2019.

Nevertheless, the Korean public's interest in the art market is peaking due to excitement over the so-called Lee Kun-hee Museum, the boom of art in NFTs (nonfungible tokens) and the boom of the art market proven through the results of art fairs and auctions. Could the general upsurge in public interest in art eventually transgress over to the betterment of public art as well?

“There may be indirect effects [from public interest in art] but no direct, dramatic effect for public art,” Suh said. “The current explosion of interest is merely a showcase of the culmination of how people view art in terms of financial investment.”

“The boom in the local art market isn’t proportional to the level of public knowledge in art history and aesthetics,” Hong said. “At this point, public art museums and biennales should present enough good exhibitions to balance market expansion, but I’m not sure if they are doing so.”

Related experts say that maintaining the balance between the public sector and the art market is also important to make the market sustainable. Without a strong, solid knowledge base of art to fully appreciate it, consumers only focus on assessing the financial worth of art works, which will eventually lead the art market bubble bursting, as was the case in 2007, experts say. The local art market underwent a major slump for a long time when the market came crashing down during the year, leaving young, popular artists in daze as the prices of their excessively high-valued works all plummeted.

Art historian Chung Yeon-shim, who served as artistic director for the DMZ Art and Peace Platform exhibition which wrapped up on Nov. 15, also expressed similar concerns. However, she added, “What is encouraging for the current market is that, compared to 2007, there is a surge in the population of young art collectors with their own distinctive tastes, principles and philosophies. They are the generation in their 20s and 30s who’ve accumulated their knowledge and experience from big-scale exhibitions and overseas travels.”

“Of course, there are still those who pursue short-term gains through investment in artwork and trade them just like bitcoin,” she continued. “But there are also those who purchase the artworks with pure intentions of supporting young artists that they see potential in. [The local market] needs more collectors like them to avoid the bubble burst as it did back in 2007.”