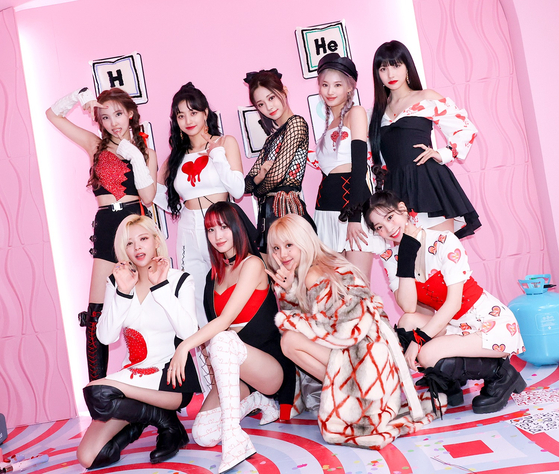 
Twice's third full-length album “formula of Love: O+T=〈3” landed at No. 3 on the Billboard 200 chart, according to Billboard on Monday.

It marked the highest rank an album from the girl group has ever reached. Its previous EP “Taste of Love,” released in June, reached sixth place on the chart.

The girl group first made it onto the Billboard 200 chart in June last year with its ninth EP “More & More,” which reached No. 200. Since then, Twice has continuously climbed the chart. Its second full-length album “Eyes Wide Open,” which was released in December last year, reached No. 72.

To thank fans, the group released its first English single “The Feels” in October. It landed at No. 83 on the Billboard Hot 100.

Twice is set to hold an offline concert “Twice 4th World Tour ‘III’” from Dec. 24 to 26 at KSPO Dome in Olympic Park, in southern Seoul’s Songpa District, before embarking on a world tour. It will perform in five cities; Los Angeles, Oakland, Dallas, Atlanta and New York and may add more cities later on.