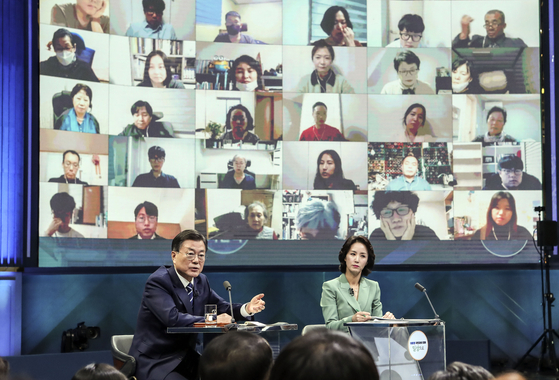 President Moon Jae-in, left, answers questions from the audience at a town hall Sunday evening in a studio in Yeouido, western Seoul, attended by some 300 people both in person and virtually. [JOINT PRESS CORPS]


President Moon Jae-in pinpointed the real estate issue as his biggest regret during his tenure, including not providing sufficient opportunities for young people to own homes and failing to stabilize housing prices, speaking at his first town hall in two years Sunday.

“I have apologized for the real estate issue several times, but looking back, I think it would have been better if we had put in a little more effort, especially into housing supply,” Moon said.

He said that it was regrettable not to have been able to provide enough opportunities for “ordinary people, young people and newlyweds to buy their own homes” by failing to stabilize real estate prices, an issue which brings a “sense of deprivation to the public.” Moon admitted that it might have been “helpful” to have implemented real estate policies a bit earlier.

A group of 300 people selected by KBS through polling agencies took part in the live broadcasted session, the first such town hall held by Moon since November 2019, before the pandemic. A group of 200 fully vaccinated people participated in person at a KBS studio in Yeouido, western Seoul, while 100 others took part virtually.

However, Moon said, under his administration, there were more housing occupants than ever before, adding, “I think the supply problem will be sufficiently resolved in the future, and real estate prices are entering a fairly stable trend now.”

Moon said he will aim for a stable downward trend for the rest of the tenure and added, “There may not be time to recover from the real estate problem, but at least we may find a solution so that the difficulties do not cross over to the next government.”

Addressing the concerns of the public, Moon noted that while increased Covid-19 cases had been anticipated when the government decided to implement its “With Corona” scheme to return to normal life at the beginning of the month, the recent rise in critical patients is concerning.

The government has been mulling another round of Covid-19 emergency relief funds, and an audience member said that those who need it the most should receive support first. The ruling Democratic Party has been considering universal grants.

Moon said he “trusts” the decision of his Cabinet on whether there will be another round of Covid-19 emergency relief and whether it will be a universal grant, or, if not, who exactly will be paid.

Moon also said that the government has tried to provide relief for the self-employed and small businesses but acknowledged that this may "still feel insufficient.”

On the urea crisis, he said it was “regrettable” that the problem was not detected earlier but added, “once the problem was identified, the government was swift to respond, and now the problem is almost resolved.”

After panic over a shortage of urea, the main component of diesel exhaust fluid (DEF), a key fluid needed for the running of diesel engines that cuts emissions, the government has scrambled to procure a stable supply of DEF needed for millions of vehicles to run.

Moon touched on social and economic issues including youth employment.

“Youth employment, which dropped due to Covid-19, recovered by nearly 99.9 percent by the end of last month” to pre-pandemic levels, said Moon. “As a result, the youth employment rate is higher than ever before. However, this is quantitative, and I think that there are still many critics who will question whether they are quality jobs that young people would want.”

Moon also emphasized that Korea has become a “top 10 nation in every aspect,” including the economy, health care, Covid-19 quarantine measures and democracy.

Moon said that he still has six months left in his five-year tenure, adding “many things can happen in that period,” and stressing, “I will word hard till the end without letting down my guard and will not give up on my original tenacity.”

The main opposition party immediately shot back at Moon’s idealizations, saying they failed to acknowledge the true difficulties faced by the public.

Lim Seung-ho, a spokesman of the main opposition People Power Party (PPP), in a statement Sunday criticized Moon for not taking into consideration self-employed people and small business owners being driven into a corner due to Covid-19 social distancing measures. He said, “I couldn't find any sincere apology from the president for the pain caused by the disruption in the supply of vaccines” or “any excuses for the suffocating four-level social distancing measures.”