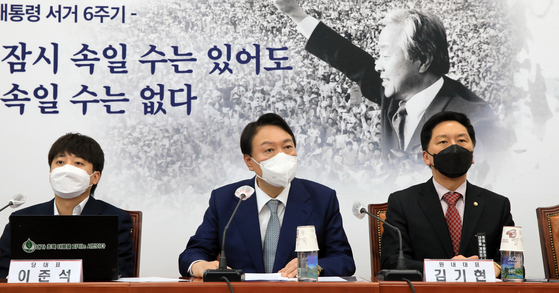 Former Prosecutor General Yoon announced that the three Kims will be joining his election campaign on Sunday, following reluctant compromise between the key players in an attempt to assemble a broad spectrum of political backgrounds ahead of the presidential election next March.

So-called conservative kingmaker Kim Chong-in, the former head of the PPP who resigned in April, will be the one-top leader, taking on the role of general chairman and overseeing Yoon’s election campaign committee. Kim also previously led former President Park Geun-hye to win the 2012 election.

Kim Byong-joon, a former interim head of the Liberty Korea Party, the predecessor of the PPP, will serve as a joint standing chairman for the election campaign committee alongside current PPP head Lee Jun-seok. He has policymaking expertise, having served as senior policy secretary under the liberal Roh Moo-hyun administration and a professor of public administration. He was briefly designated as prime minister by then-President Park in 2016.

Kim Han-gil, a former head of the ruling Democratic Party (DP), will lead a separate “new era preparatory committee” and is expected to play a role in drawing in undecided centrists.

Yoon met with Kim Han-gil Sunday and told reporters afterwards that Kim will “promote harmony between generations and regions,” bringing together young people and middle-aged people and "moderates and logical progressives."

However, Yoon, in a proposal to appoint Kim Byong-joon and Lee Jun-seok as standing co-heads for his election campaign committee Monday, did not include Kim Chong-in as the general chairman.

Yoon led a PPP supreme council meeting for the first time and said that when Kim Chong-in “makes the final decision,” he will then raise the proposal. Kim was said to have asked for a few more days.

Regarding the preparatory committee for a new era chaired by Kim Han-gil, Yoon said, “I am going to run an election campaign with people who want to participate in a change in administration." Yoon said he wants his election committee to be one that "unifies" the party.

Kim Byong-joon and Kim Han-gil pushed for Yoon joining the PPP despite some initial hesitancy within the party.

Kim Chong-in has been resistant to the selecting of the two other Kims to the election committee leadership but reportedly came to an understanding with Yoon Saturday. In turn, Yoon also is said to have agreed to include some staunch conservatives in the campaign and will likely reduce the size of the election committee compared to initial plans.

Yoon told reporters Sunday that the three Kims are “known to be close” and that there will be “no problem in communication.”

However, sources around Kim Chong-in indicate he still may not be satisfied with the leadership balance.

Yoon also has faced difficulties drawing in PPP Rep. Hong Joon-pyo, the runner-up in the conservative party’s primaries who garnered higher support from youths, an essential demographic for swing votes in next year’s election, than the former prosecutor general. Hong, while quickly accepting his primary defeat earlier this month, also made clear he doesn’t plan to take part in Yoon’s election campaign.

Hong on Sunday stood by this position and described Yoon’s election campaign committee as “mishmash” and questioned, “Should the young generation in their 20s and 30s support this old-fashioned leadership?”

However, other defeated key contenders such as Hong, Yoo Seong-min and Hwang Kyo-ahn will be missing.