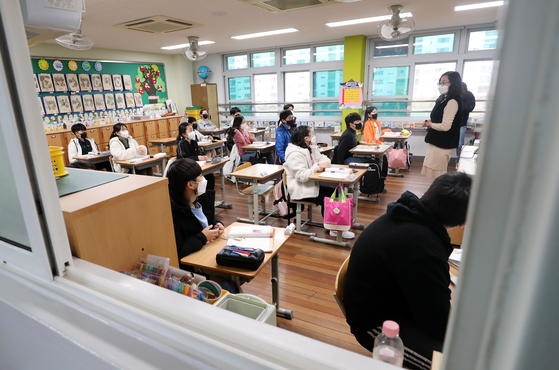 Students at the Dunsan Elementary School in Daejeon attend class on Monday as in-person school classes in all kindergartens, elementary, middle and high schools across the country resumed for the first time since the coronavirus pandemic broke out nearly two years ago. [YONHAP]


Health authorities declared that Korea’s Covid-19 risk was “high” over the past week, as pandemic indicators continue to worsen.

By region, the greater capital area was at “very high” risk, while other regions were at a “medium” risk level, authorities said.

The Korea Disease Control and Prevention Agency (KDCA) announced Monday the results of their weekly virus risk assessment from Nov. 14 to 20 based on a new five-tier system.

For risk assessment, health officials earlier said they would use 17 indicators in three categories — medical and quarantine systems, Covid-19 outbreaks and vaccinations — and evaluate the risk level of the pandemic on five-tiers: “very low,” “low,” “medium,” “high” and “very high.”

“Leading indicators of Covid-19 such as the number of cases and the basic reproduction number are worsening,” the KDCA commissioner Jeong Eun-kyeong said during a press briefing on Monday, “and the capacity of hospital beds nationwide is expected to deteriorate for a while.”

This was the first time in six days that daily infections fell below 3,000, though it marked the highest figure ever reported on a Monday. It was up by 822, or 40.9 percent, from last Monday’s figure.

The number of critically ill patients reached 515 as of Sunday midnight, staying in the 500s for a third day in a row.

Twenty-four more people died from the virus, with the death toll coming to 3,298.

As the country strives to ensure enough hospital beds for the sick, the capital city of Seoul, where the ICU occupancy rate has hit nearly 85 percent, announced Monday it will expand Covid-19 home treatment to people aged 70 or above who are fully vaccinated, or who have a caregiver who can quarantine at the same time.

So far, home treatment has been applied on a limited basis to virus patients aged under 70 who are asymptomatic or display only minor symptoms.

As infections have soared, especially among the elderly, the KDCA chief called for a strengthening of preventive measures against the coronavirus, including putting a time limit on so-called "quarantine passes."

“It is necessary to set a validity period for the ‘quarantine pass’ system of fully vaccinated people,” Jeong said.

Korea’s Covid-19 vaccine certificate, known as the “quarantine pass,” has been implemented in places where the virus could spread more easily, including noraebang (singing rooms), bathhouses, indoor sports facilities, clubs and bars that allow dancing, nursing homes and senior citizen communities. Authorities cited overseas cases where they make such passes valid for only six to nine months after second doses or require booster shots.

Jeong also mentioned the need for Covid-19 booster shots for people between the ages of 18 and 49, which is expected to pick up steam in the first half of next year.

Currently, Korea is giving boosters to people aged 50 and over, adults who have underlying diseases, Janssen recipients, people with reduced immunity, employees and patients at nursing facilities and medical institutions and priority occupational groups.

“We believe there is a need to expand the eligibility for booster shots to all age groups considering the current virus situation and immunity waning over time,” Jeong said.

While the exact schedule hasn’t come out, Jeong hinted it will be around the first half of next year considering that the majority of people aged 18 to 49 completed their vaccinations in October.

During a televised town hall meeting on Sunday evening, President Moon Jae-in said the government expects daily Covid-19 cases to reach up to 10,000, yet expressed concern over the recent surge in infections and serious cases.

“It’s concerning that the number of critically ill patients is increasing rapidly and that we're tight on hospital beds,” Moon said. “If that number increases beyond the capacity of our medical system, we cannot but take emergency measures and temporarily halt the gradual return to normalcy or strengthen distancing rules.”

The president mentioned Korea may expand vaccinations for children, following the example of other countries.

“The United States has started inoculations for those aged 5 to 11,” Moon said. “We will keep an eye on its progress and lower the vaccination age restriction if it's deemed safe and effective.”

“We have signed a pre-purchase contract for oral Covid treatments developed overseas […] for 400,000 people, which should arrive no later than February,” he said. “We’re working to move up the period a bit.”

Moon added, “Korea is the third country in the world to develop Covid-19 treatments.

“Eleven companies are currently developing their own treatments, and two of them are in phase 3 trials. I'm looking forward to it as the processes have gone well,” he said.