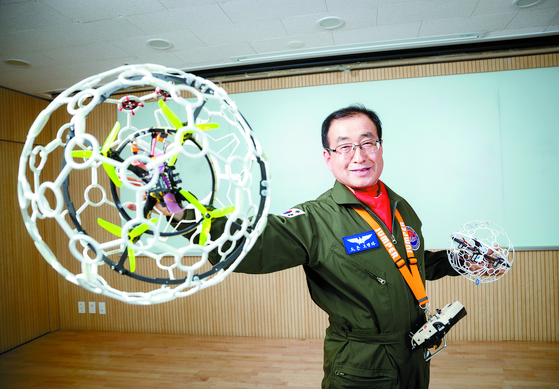 Kang Ho-sik, 62, is a full-time drone instructor who became certified after retiring from his previous job. [JEONG JUN-HEE]


"I was a retired salaryman who had started working as the head of management at an apartment in Seoul when I saw a drone spraying disinfectants over trees on the news," says Kang Ho-sik, a 62-year-old.

"I decided to attend a drone academy in order to take better care of the apartment's greenery, but in retrospect I think the technology was so fascinating that it made me want to learn more about it."

Having excelled at the academy as a student, Kang is now a certified, full-time drone instructor at Seoul City 50 Plus, a foundation that helps the city's seniors transition into a productive post-retirement life.

Kwak Jeong-suk, 65, is another retiree who transformed her life as a kindergarten teacher to that of a senior care expert.

"The communication skills that I have accrued as a teacher really came in helpful when taking care of seniors and organizing events for them," Kwak says.

Kwak also says that she feels like another chapter of life has opened up for her since becoming a health care expert.

"I want to change the country's culture of admitting elderly with Alzheimer's into senior homes," says Kwak.

Commonly referred to in Korea as active seniors, these 55-or-older individuals strive for an empowering and productive second gig after retirement.

According to Statistics Korea, 68.1 percent of people ages 55 to 79 said that they wanted to work after retirement.

Of those, 58.7 percent said that the reason they wanted to work after retirement was to sustain a living, and 33.2 percent answered to feel the joy of working again.

The number of consumers in this age group has grown exponentially over the past few years.

According to the Hana Financial Research Center's report made in August, payments made on food delivery apps in 2020 by those in their 50s and 60s saw a 163 percent and 142 percent on-year increase, respectively.

"Active seniors in Korea actually have enough wealth saved up to be able to enjoy spending and actively participate in the economy as consumers, contrary to the past generations of seniors who usually didn't have such deep pockets," said Seo Yong-gu, business professor at Sookmyung Women's University. 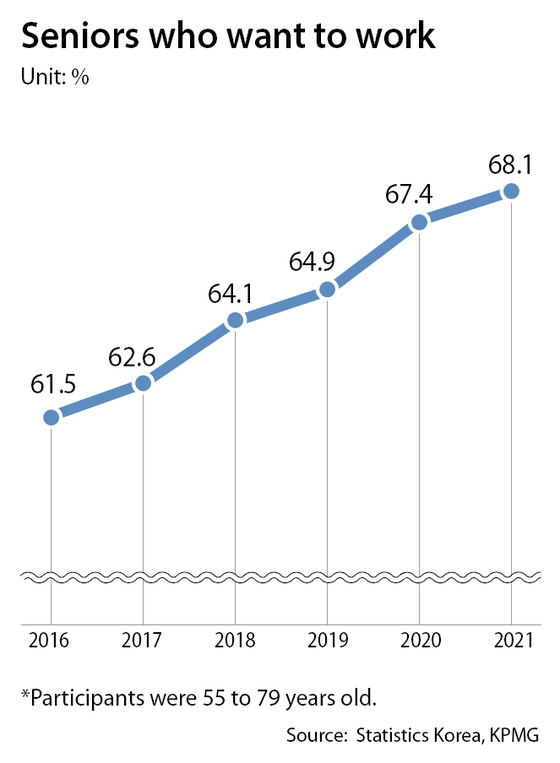 With their high self-awareness and ambitious goals, active seniors these days differ from the traditional Korean seniors who are often passive and very conservative.

Lee Jang-hee, 57, is considered one of the brightest new talents in the digital health care business: He is a starting member at SevenPointOne, a rising start-up that provides early screenings for seniors with dementia. With a speedy promotion, he rose to the company's chief marketing officer earlier this year.

But before becoming a top executive in the hot tech start-up, Lee was considered a big-time PR executive at his previous job, leading promotional campaigns and advertisements of companies such as Hyundai and Amorepacific for over 20 years.

"I wanted to put my passion into something new, so I left my job and started to intern at a senior health care start-up," said Lee.

"If my skills help this society even a little bit, I plan to work for as long as possible."

"Lee anticipates potential problems and directs business with a sharp intuition that derives from his wide range of experience," said Lee Hyeon-jun, CEO of SevenPointOne.

"He works with great passion no less than that of a younger employee. He is a role model for many employees in the company, including myself."

In 2020, the nation's population over the age of 65 surpassed 8 million and now accounts for 16.4 percent of the entire population.

"Active seniors may be the ones to breathe life back into Korea's aging and ailing economy," said Kim So-yeong, economics professor at Seoul National University.

Accounting for 23 percent of the entire population in Seoul, those in their 50s and 60s are the largest age demographic in Seoul.

Does directory inquiries have a future offering advice to the elderly?