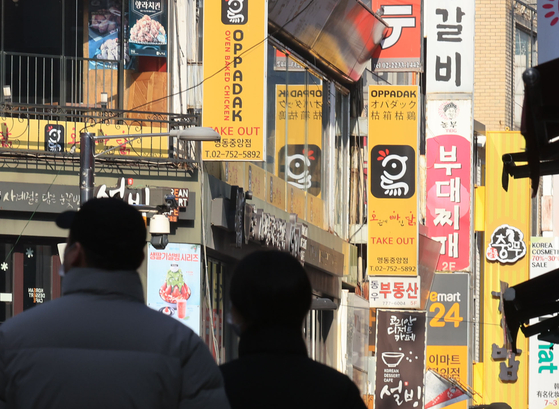 A street in Seoul clustered with restaurant in November. Despite the government easing social distancing regulations since the beginning of this month, as the number of people tested positive with Covid-19 shows little signs of decreasing, small shops including restaurant and coffee shops continue to struggle. [YONHAP]

Some 42 percent or 5.3 trillion won will be financed through this year's larger-than-expected tax collections.

Some 900 billion won will be paid for by using budgets earmarked for other purposes such as promoting sports or farms.

The remaining 6.3 trillion will be financed through borrowing.

The biggest beneficiaries will be small shop owners in business that involve direct contact with customers, who were particularly hurt by social distancing restrictions.

Some 10.8 trillion won will be allocated to help them.

Some 1.4 trillion won will be used for vocational training and financial loans to young people from low-income households.

Some 400 billion won will be used to counteract inflation including financial aid to farms and as energy vouchers for low-income households.

“Despite vaccinations now reaching close to 80 percent [of the population], the situation today is tough,” Finance Minister Hong Nam-ki said Tuesday during an emergency economic meeting. “The difficulties that small shop owners face continue ... We plan to focus all of our policies in the last quarter of this year to support small shop owners that have been hurt [by Covid-19], stabilizing the livelihoods of people and boosting the domestic economy.”

There has been a big push by the ruling Democratic Party to use the buoyant tax collections to finance another round of universal emergency relief grants ahead of next March's presidential election.

In the first nine months of this year, the government collected 274.5 trillion won in taxes, a 28 percent increase year-on-year.

The government estimates that by the end of the year it will have collected 19 trillion won more than what it estimated earlier.

In July, the government estimated this year’s tax revenues at 314.3 trillion won, which was 11 percent higher than its initial estimate at the end of last year.

The opposition People Power Party accused the DP of buying votes for the upcoming presidential election in calling for more universal handouts.

With low public support for the idea, DP presidential candidate Lee Jae-myung officially said last week he was withdrawing his own demand for another round of universal emergency relief grants.