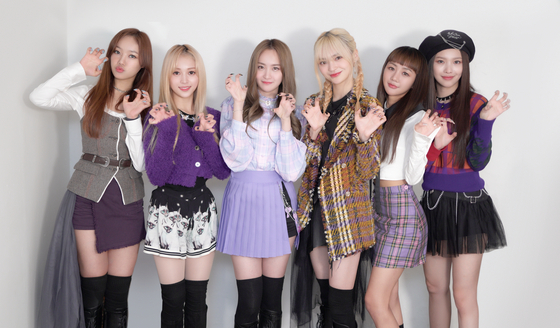 
When it comes to K-pop idol groups, it takes more than just talent to catch the public’s attention. In recent years, K-pop groups have been debuting with their own elaborate and creative themes. But members of rookie girl group bugAboo debuted last month with an unlikely theme: Their greatest fears.

bugAboo centers around the theme of facing one’s fears and overcoming them. The six-member girl group — consisting of Eunchae, Yoona, Rainie, Cyan, Choyeon and Zin — sat down for an interview with the Korea JoongAng Daily on Thursday at a cafe in Gangnam District, southern Seoul.

“A bugaboo refers to something scary and surprising that’s within our hearts,” said the group’s leader Choyeon. “Our team name conveys that we want to overcome these bugaboos together and achieve our dreams.”

The music video for its debut song, also titled “bugAboo,” which garnered over 15 million views in less than a month, portrays members fighting against animated imagery of ghosts and ghouls. The six members each revealed their respective bugaboos — quite an unconventional self-introduction from a newly-debuted girl group. 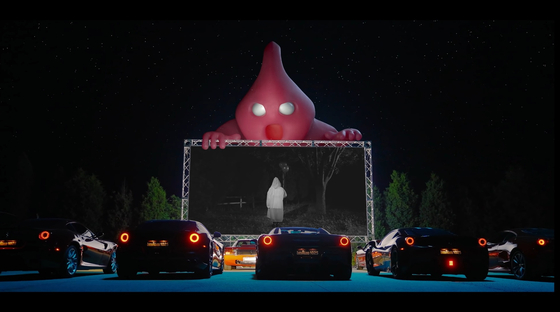 The music video for bugAboo's debut song “bugAboo” portrays members fighting against animated ghosts and ghouls that represent their fears. The video surpassed 15 million views in less than a month. [SCREEN CAPTURE]


“My bugaboo is passion,” Choyeon said. “I’m a perfectionist, so I’m passionate about everything I do. But I sometimes get overzealous and my passion gets the best of me. Still, that’s part of who I am. So while I hope people support my passion, I’m also trying to accept that side of me.”

For member Cyan, “being ordinary” is her greatest fear.

“I like being unique, and I’m worried that I’ll become swallowed by the ordinariness that society requires from me,” she said. “So I want to send the message that everyone should be their unique selves without conforming to what’s deemed ordinary.”

“I’m a foodie, and there’s so much delicious food in this world,” said Yoona, a member from Japan. “But since I also want to look good for my fans, my bugaboo is being on a diet.”

“The language barrier is my bugaboo,” said Taiwanese member Rainie. “When I first came to Korea, learning the language was so hard and I could barely communicate. But I’m always studying hard and slowly overcoming that barrier.” 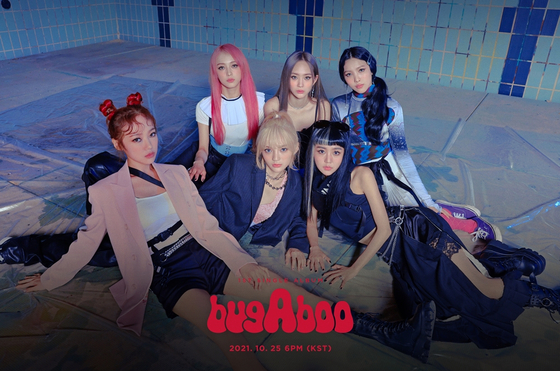 
“The internal feeling of depression that visits me from time to time is my bugaboo,” Zin said. “We all have times when we have depressing feelings within us, and I want to say, ‘Let’s overcome them together.’ By overcoming our own fears, we want to show people that they can do it too.”

“My bugaboo is when time seems to stand still,” said Eunchae, who first became known to the public when she appeared on Mnet’s 2018 audition show “Produce 48” with Choyeon.

“Before debuting as a member of bugAboo, I was a trainee for six long years. During those years, I struggled with anxiety about my uncertain future.”

Being the oldest member of the group who underwent the longest training period, Eunchae had many stories to share.

“There were so many moments when I just wanted to give up. I was even scammed by an agency. But my family and fellow members [who were in training] were my greatest motivation to keep going,” she continued. “I still vividly remember the day it was decided that I would become a member of bugAboo and finally debut. I thought I wouldn’t make it on the team since I’m on the older side [for a K-pop idol], but I thankfully did. I was in tears all day. I’m sure there are many others who are going through a dark time and feeling the same way I did. I hope my story encourages them.” 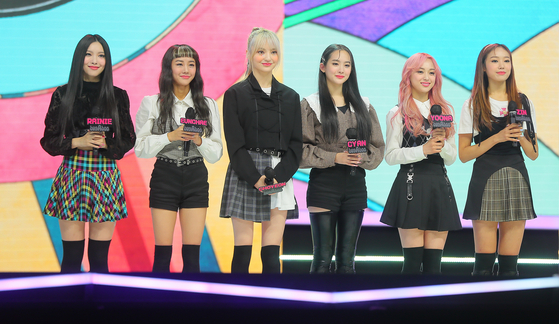 
Choyeon was also a trainee for five years and said she experienced a similar period of hardship.

“As I watched former fellow contestants from ‘Produce 48’ debut one by one, I had self-doubts about why I was staying stagnant,” she said. “But it also reminded me that those girls did their best to reach their dreams, and that I should too. I hoped we would meet in the waiting room [of a music show] in the future. That’s what kept me going and led me to debut as bugAboo.”

Such personal backgrounds seem to have helped members empathize with bugAboo’s theme.

“Honestly, all of us cried when we were first told about this concept,” Eunchae said. “The idea that not only do we have to face our own traumas, but also can share our process of overcoming them to give people hope was touching. I remember us crying and laughing together, saying it’s a great concept.”

In an industry known to present perfect and cheery outward images at all times, members opening up about their fears and dark moments from the beginning as part of the girl group’s core identity may come across as refreshing. 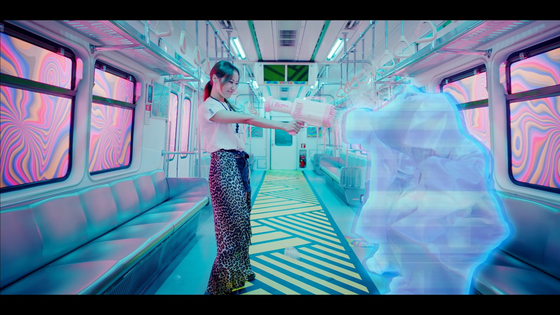 A scene from bugAboo's music video for "bugAboo" [SCREEN CAPTURE]


“Depression is a difficult topic to bring up with others,” said Zin. “By mustering courage [to open up] myself first, I want other people to find courage too.”

So far, bugAboo has been seeing impressive results for a rookie act. Apart from the high number of YouTube views, the song “bugAboo” instantly entered domestic music charts upon its release. The girl group has also conducted interviews with numerous foreign media outlets, including major American radio network iHeartRadio Chicago immediately after its debut.

“When we were told that we were going to have an interview with iHeartRadio, I was genuinely shocked and asked, ‘Interview us? Really? We just debuted!’" said Choyeon. “The interviews inspired us to keep working harder.”

Members shared their opinions on why bugAboo has been able to quickly build an international fan base — a fandom dubbed Rainboo, a name which fans came up with first and was officially selected through an online vote.

“Our song ‘bugAboo’ has a catchy melody and bass sound,” said Zin. “The highlight part of the song is an addictive melody and is easy to sing along to. I think that’s why fans around the world are enjoying the song.” 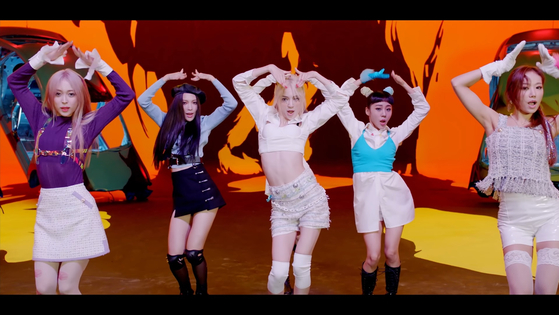 “Another factor in my opinion is that thanks to Rainie and Yoona, fans in Taiwan and Japan are showing support,” said Cyan.

Rainie was active as a child actor in Taiwan, and started dreaming of becoming a K-pop singer after falling in love with girl group Girls’ Generation. Her fanhood led her to attend auditions and make her way to Korea.

“Fans from my child actor days have been supporting me to this day, and now their reactions are: ‘Wow, Rainie debuted in Korea! That’s so cool!’ They’re saying they want bugAboo to visit or hold a concert in Taiwan in the future, which excites me too.”

Yoona’s career began by chance when she attended the K-culture festival KCON in Japan and won a talent show held as part of the event.

“I came in first place for dancing to the theme song of ‘Produce 48,’” Yoona said. “A K-pop agency official happened to see me and offered me a chance to become a trainee. That’s how I came to Korea.

“There are not many idol singers from my hometown Sapporo, so my friends were very supportive. Since K-pop is really popular in Japan nowadays, they tell me that it’s surreal to see me on the stage as a K-pop idol. Reading comments from Japanese fans makes me really happy and gives me the strength to work harder.” 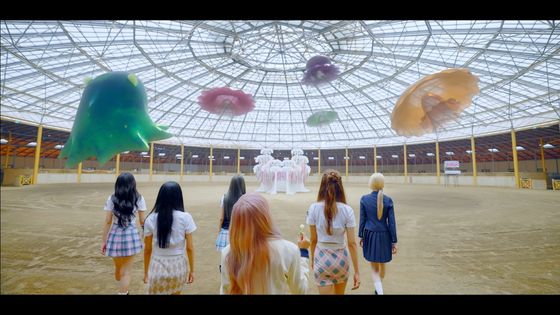 A scene from bugAboo's music video for "bugAboo" [SCREEN CAPTURE]


As social distancing measures were relaxed in Korea this month, bugAboo anticipates to meet fans at more in-person events soon.

“In the future, we want to host a ‘reverse-gifting’ event for our fans,” Choyeon added. K-pop idols are known to receive various gifts from loyal fans, but bugAboo wants to repay Rainboo for their support instead.

“We want to brew coffee and bake for them, since some of our members are good at baking. We just want to give little gifts and chat with them.”

“We recently held an offline autograph event,” said Cyan. “My heart fluttered and I was so happy to finally meet our fans in person. A rainbow has seven colors; bugAboo has six members, and our fans [Rainboo] make seven. We want them to know they’re always part of us.”