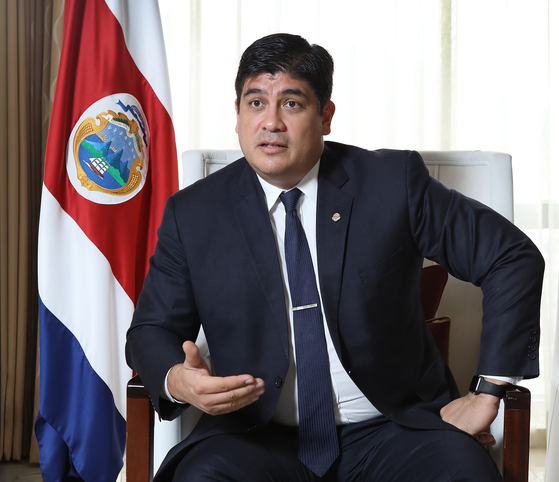 Carlos Alvarado Quesada, president of Costa Rica, speaks with the Korea JoongAng Daily at the Millennium Hilton Seoul on Monday. The president is in Korea on a state visit through today. [PARK SANG-MOON]

Costa Rica and Korea are well positioned to show the rest of the world that taking daring steps in combating climate change is possible and better together, said Carlos Alvarado Quesada, president of Costa Rica, in speaking with the Korea JoongAng Daily in Seoul on Monday.

“We want to have great allies, in this case with Korea, to demonstrate to others that it is possible, such as we managed to reverse deforestation, to abolish completely [our reliance on] fossil fuels,” said Alvarado, speaking to the paper with Seoul's autumn scenery in the background.

It was his first state visit to Asia since he took office three years ago, and he has good reasons as to why he chose Korea out of all the countries in the region.


“I admire profoundly what President Moon has accomplished, and I feel very close to his progressive approach on politics and also democracy and human rights and civil rights,” said Alvarado. “I think he has [become] a standard in the region, and similarly that is what we’ve been trying to do back home in Costa Rica with my administration.”

Costa Rica, which has consistently ranked as one of the top democracies in international indices in recent years, is also known among environmentalists for its green initiatives: It has pledged to be “a world laboratory for decarbonization” since the Paris Agreement in 2015 and has committed to be fully decarbonized by 2050.

President Alvarado’s state visit to Korea also comes in the lead-up to the 60th anniversary of Korea-Costa Rica diplomatic relations next year.

Accompanied by ministers of foreign affairs and worship; foreign trade; and science, technology and telecommunications, the presidential delegation signed on Tuesday several agreements with Korea on science and technology, digital policies and sustainability. The two presidents also agreed to elevate bilateral ties to an action-oriented comprehensive partnership on Tuesday.

“Our agreements today in the digital government and science and technology sectors will set an important example as the rest of the world navigates a post-Covid-19 period,” Alvarado was quoted to have said by the Blue House.

The Korea JoongAng Daily sat down with President Alvarado at the Millennium Hilton Seoul on Monday to hear his thoughts on how Korea and Costa Rica can be frontrunners on green energy transformation, his opinion on the more controversial Covid-19 issues like mandatory vaccinations, and his personal views on Korea — all coming from someone who, prior to his political career, was once also a journalist and a novelist. 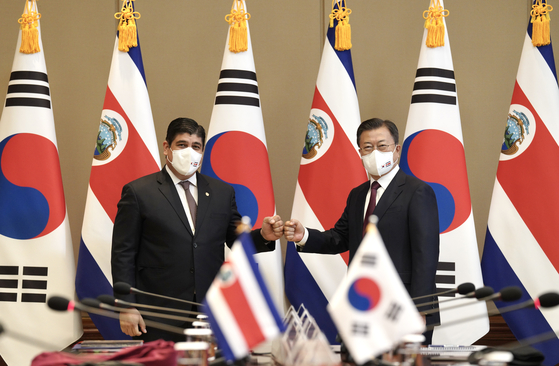 Costa Rican President Carlos Alvarado Quesada, left, and President Moon Jae-in greet each other with a fist bump at the start of their summit talks in Seoul on Tuesday at the Blue House. [JOINT PRESS CORPS]

Q. This is your first visit to both Korea and Asia since your term in office began in 2018. What are you hoping to achieve most?


A. First of all, we believe Costa Rica and Korea have so many common values. Even though we are separated by oceans of distance, we are very close in our principles — our defense of human rights, our defense of the environment and sustainability, and also our struggle for peace. We want to have very close relations with Korea to have a stronger partnership.


In your annual speech to the congress last year, you said that Costa Rica must strive to be “the Korea in Latin America.” What did you mean by that?

I meant that we need to be a country that drives itself through innovation, hard work, discipline and values — good values [like] human rights, peace, democracy, rule of law. Because Korea is a country I admire a lot. Korea has demonstrated for the past decades an approach in which you can grow economically and also have that benefit […] of the well-being of the people — that is something that I want for Costa Rica. We have good accomplishment in human development. I also believe we can take it to the next level, and Korea is a good example to follow.


Next year marks the 60th anniversary of bilateral relations, but it’s also when the two countries will have presidential elections. Could the changes in administrations mean changes in bilateral objectives?

We are honoring our 60th anniversary of bilateral relations next year, and for the past six to seven years our bonds have become stronger. We are now partners through the OECD and FTA, so there are bonds that go beyond administrations. But that is why we are here also, because we want to nourish that relation for the time to come. I am confident that the strength of the relation will go further than [our current] administrations.


Costa Rica’s reforestation and green policies are well known in Korea. Are there complementary areas for the two countries to work together on green technology and renewables?

Costa Rica’s electric grid is 99.5 percent clean and renewable. Our main carbon footprint is from transportation and use of fossil fuels. So we can, rather rapidly, transform [our energy source] from fossil fuels into clean energy for transportation, and that means electric vehicles, hydrogen vehicles. In that sense, technology is key, and we see Korea as a reference [with] which we can work together.


Costa Rica and Denmark led a coalition of countries at the COP26 to phase out of oil and gas, called Beyond Oil and Gas Alliance (BOGA). What is the phase-out timeline for Costa Rica, and will this action be set in stone by domestic legislature?

We are currently fighting in congress to have a law approved for the complete ban of oil exploitation and exploration — we don’t exploit or explore our oil, but it is said Costa Rica has oil reserves. We are renouncing that. And that bill we are fighting for in congress — it is in the last process — will ban it definitely.


There are several international coalitions like BOGA that are well-intended but do not contain the major emitters like the United States, China or Russia. How do you think world leaders can better close the gaps in global environmental governance and implement green actions in a concerted manner?

Let me tell you a story about the High Ambition Coalition. It started in 2019, the idea came up in the pre-COP that was held in Costa Rica. At the time, when we launched the coalition for the “30 by ‘30” that means 30 percent protection [of Earth’s land and ocean area] by 2030, it was just five countries. People say, “It’s too ambitious and there’s only a few of you.” Two years later today, it is a coalition of 76 countries, and one of the countries that united the coalition is India. It’s a movement that is growing. And even though the United States have not committed to [BOGA], they are following the same guidelines of the coalition. So there is a strong moral power and also an example power [for these countries] to show the way.


Costa Rica mandated all children get vaccinated against Covid-19. What is your take on those who say that vaccination should not be mandated in a democratic country?

That is a [topic of] strong debate, both internationally and back home. In Costa Rica, it is mandatory to vaccinate children for many diseases at an early stage — that is how we managed to eradicate polio and chickenpox. Actually we are also having the mandatory vaccination of human papillomavirus for girls and also a certain amount of boys, and this is going to prevent diseases [from spreading] afterwards, and also it is going to decrease the expenditure in social security, which we all pay. So I know it is a hot topic on debate, but my stance is that if it is within a government that has a constitution that provides the framework and also tells that the rules must protect citizens, I do believe that is the way to go.


On a more personal note, if you were traveling to Korea not as a president, but as a journalist or a novelist again, what do you think you would want to write about based on your visit to Korea?

I haven’t been thinking of literature for a while, but I would love to explore not only the similarities between our cultures, but especially the contrasts between our cultures. Because we are very democratic, we share those values, and Costa Ricans and Koreans are people that tend to be really close. […] We are very friendly; we like to, for instance, share a nice bottle of soju, and have a laugh and perhaps dance and sing. But I would like to explore the differences, because I find that intriguing. For instance, Costa Rica abolished its army 72 years ago. So our views on hierarchy are very different from the views of Korea on hierarchy. These kinds of things I’d like to explore more to understand more our friendship.