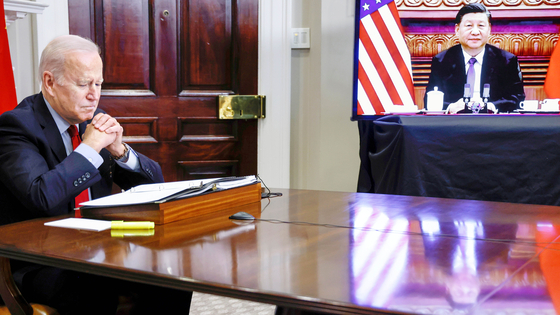 The U.S. State Department stressed Tuesday that South Korea and the United States must work together against China's rising assertions, clarifying what role Washington expects Seoul to play amid its growing rivalry with Beijing.

“American leadership must meet this new moment of growing authoritarianism, including the growing ambitions of the [People's Republic of China] to rival the United States,” a State Department spokesperson told the Voice of America Tuesday, in response to a question about what sort of Seoul-Beijing relationship is in the interest of Washington.

South Korea's First Vice Foreign Minister Choi Jong-kun posed a “rhetorical question” in a strategic forum held at the Center for Strategic and International Studies (CSIS) think tank in Washington on Nov. 15 and asked, “For the interest of the United States, which one is better? South Korea having a really bad relationship with China, or South Korea having a good working relationship with China. Which one will be good for the interest of the United States? I do not have a clear answer.”

Choi had been on a visit to Washington for bilateral and trilateral meetings with his U.S. and Japanese counterparts to discuss North Korea and other regional issues.

The State Department spokesperson, however, had a clear answer on what Washington expects from its allies and said, “We must meet this new moment of accelerating global 21st century challenges, from the pandemic to the climate crisis to nuclear proliferation, which can only be solved by nations working together and in common. We can’t do it alone.”

Similarly, the official added that China can “do more” to combat North Korean sanctions evasion efforts happening in Chinese waters and urged Beijing to “fully and completely fulfill their obligations” under UN Security Council resolutions.

Describing the Seoul-Washington alliance as the “linchpin of peace, security and prosperity for Northeast Asia, the broader Indo-Pacific region and beyond,” the spokesperson said the two countries’ military and defense ties are “ironclad” as are “bonds based on mutual trust and shared economic and democratic values.”

The official added that the “increasing economic, technological, diplomatic, people-to-people ties are equally strong and enduring.”

The Sino-U.S. technological rivalry has often put South Korea in a difficult position, including most lately SK hynix’s plans to upgrade a large chip-making plant in China. U.S. officials reportedly do not want advanced equipment used in the process to enter into the country, fearing it could be used to bolster Chinese military and strategic capabilities.

Choi during the CSIS speech said that South Korea is worried about supply chain resilience and overdependence on China. But he also pointed out that Korea’s trade volume with China is larger than that of the United States and Japan put together, benefitting Korean companies. 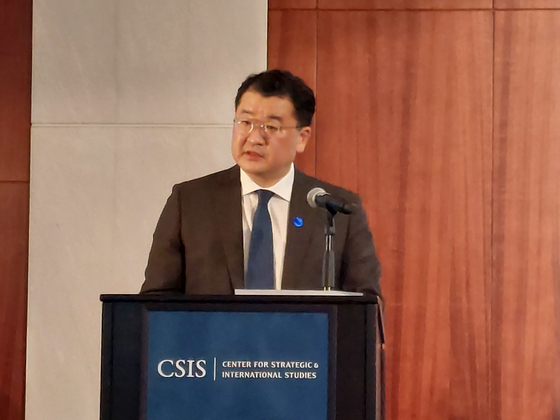 Despite the Joe Biden administration’s push for strengthened trilateral cooperation with its East Asian allies, in part to counter China’s rising assertions in the region and for unity in responding to North Korea’s threats, South Korea and Japan have been riddled by deteriorated relations over history issues.

U.S. Deputy Secretary of State Wendy Sherman on Nov. 17 ended up in an awkward situation, holding a solo press conference because of her Korean and Japanese counterparts' dispute over the Dokdo islets in the East Sea.

Japanese Vice Foreign Minister Takeo Mori boycotted what should have been a joint press briefing with Choi and Sherman that would have showcased three-way cooperation following their trilateral talks in Washington. Mori pulled out last minute as Japan protested a visit by Korea's police commissioner general to the Dokdo islets.

Ned Price, the U.S. State Department spokesman, said in a press briefing Monday on Washington’s take on Tokyo skipping the joint conference, “Everything we’re trying to achieve will be more successful if we have a deep trilateral relationship,” which includes areas of common interests such as a free and open Indo-Pacific, North Korea, climate change and economic prosperity.

He added that “the trilateral session itself was very constructive” and was “an opportunity for the three countries to compare notes to discuss these many areas, shared areas of concern, to discuss our common objectives.”