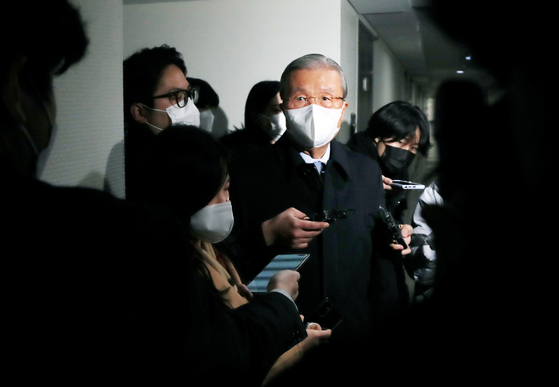 Former Prosecutor General Yoon and Kim, the former interim head of the PPP, continue to collide, making it unclear if Kim will serve as the one-top leader to oversee Yoon’s election campaign committee despite early efforts by the party to court him to oversee the campaign.

"I don't want to talk about politics anymore," Kim Chong-in told reporters at his office in Gwanghwamun, central Seoul. “I will return to my daily life from today."

Despite apparent efforts to assuage differences as Yoon solidifies the leadership of his election campaign committee, the two sides in recent days have continued to clash behind the scenes.

Kim said, "I've already spoken a lot about the circumstances under which I view the election. You will be able to see why I came to such a decision.”

Kim Chong-in has openly expressed skepticism of the appointment of Kim Byong-joon, a former interim head of the PPP’s precursor, the Liberty Korea Party and a senior policy secretary under the liberal Roh Moo-hyun administration, to the election campaign leadership. Kim Chong-in, who has pushed for economic democratization, and Kim Byong-joon, a supporter of decentralization, are known to have some bad blood on a personal level due to past tiffs and fundamentally differing ideologies.

Yoon arranged a meeting with Kim Byong-joon and Kim Chong-in Saturday to encourage a reconciliation, and they seemed to have smoothed out their differences on the surface.

The next day, Yoon announced that the “three Kims” will be joining his election committee, leading to expectation that the leadership structure of his campaign had finally shaped up.

Yoon proposed appointing Kim Byong-joon and PPP head Lee Jun-seok as joint standing chairman for his election campaign committee in a supreme council meeting Monday. Kim Chong-in was missing from the proposal, however, and Yoon said at the meeting that Kim wanted “one or two more days” to make a final decision.

Another staunch supporter of Yoon, Kim Han-gil, a former head of the ruling Democratic Party (DP), will lead a separate “new era preparatory committee” and is expected to play a role in drawing in undecided centrists.

In turn, Kim Chong-in has expressed to people around him his disgruntlement at what he saw to be Yoon’s unilateral appointments to the committee leadership. Kim reportedly has not been returning Yoon’s calls, indicating signs of a continued rift.

When asked by reporters Monday if he has anything to say about Yoon’s remark saying he needs more time to make a decision, Kim Chong-in replied, “I have nothing to say.”

He likewise gave a vague response to whether he agreed with Yoon’s election committee appointments, asking, “Agree to what?”

When asked by reporters if Kim Chong-in delayed joining his election campaign because of Kim Byong-joon’s appointment after the supreme council meeting Monday, Yoon likewise replied tersely, “That’s for all of you to investigate.”

“It looks like things have been resolved on the surface, but since last Friday, the atmosphere has been teeter-tottering every day,” a key conservative source familiar with both Yoon and Kim’s situations told the JoongAng Ilbo Sunday. “I heard that candidate Yoon strongly expressed his intention to go about without Kim Jong-in. Former Chairman Kim is in an unpleasant situation."

Yoon may have to launch his election campaign committee ahead of the March 9 presidential elections next year without Kim Chong-in.

Multiple sources from the PPP have said that Yoon has said there is such a possibility to move forward without Kim. Likewise, Yoon pointing to one or two days of waiting time could be a way of setting a deadline of sorts for Kim to make up his mind.

When asked about Kim Chong-in’s remarks saying that he had never asked for a few more days to make a decision, Yoon told reporters during a visit to the Dongdaemun Design Plaza in central Seoul Tuesday, “Don’t ask me about what that person said.”