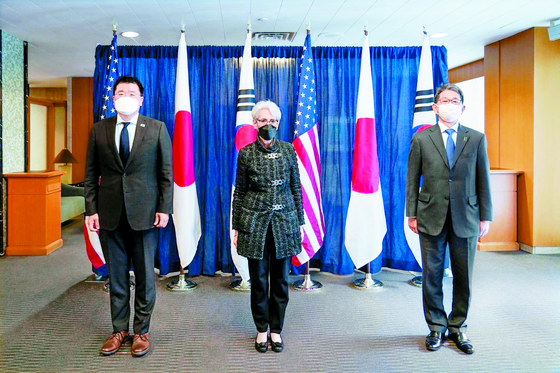 PARK HYUN-YOUNG
The author is a Washington correspondentof the JoongAng Ilbo.


As I work in Washington DC, I often feel the power of Japan’s diplomacy. Japan has a presence as the third largest economy in the world, and many Americans seem to be charmed by its delicate and steady approach. If diplomacy means getting what you want, Japan took Korea by surprise in Washington last week.

Korea, the U.S. and Japan were scheduled to have a joint press conference after a vice foreign ministerial meeting. As the Biden administration’s motto is to value alliance, it revived the diplomatic event after four years. U.S. Deputy Secretary of State Wendy Sherman prepared a grand press event. The Dean Acheson auditorium, which is ten times larger than the regular briefing room, was reserved to invite reporters from the three countries. As the Biden administration believes that the power of America comes from alliance, it was a chance to send messages to the “enemies.”

But the plan fell through as Japan lashed out at Korean police chief Kim Chang-ryong’s Dokdo visit and notified the U.S. that it would not attend the meeting. Japan’s rhetoric was that if Japanese reporters ask questions to Japanese foreign ministry deputy secretary general Takeo Mori about the visit, he would have to give harsh answers, so it wouldn’t attend at all.

The fiasco showed that the U.S. has no solution for Korea-Japan discord. I also saw the power of Tokyo’s persuasion to make unreasonable demands to Washington. Some critics say that Japan made a plan that the U.S. had to comply with Japan’s demand even as it lost face.

In the end, Deputy Secretary Sherman chose to have a conference by herself. As a result, Korea lost the chance to advocate for the Korean government’s foreign policy strategies to the U.S. media, including the efforts to reinforce the alliance after the Korea-U.S. summit in May and the declaration to end the war as an entry to North Korea’s denuclearization.

Japan also made the “achievement” of bringing the Dokdo issue into the spotlight. In Washington, after a high-level U.S. official mentioned the “disagreement between Korea and Japan,” foreign media started reporting that the press conference was canceled due to an “islet dispute,” (Reuters), “a dispute” (The Guardian) and a “feud” (Bloomberg).

Making an international issue out of Dokdo benefits Japan. It succeeded in turning the territory effectively controlled by Korea into a subject of territorial dispute.

If Korea didn’t know about the consequence of the police chief’s trip to Dokdo the day before Korea-U.S.-Japan consultation, it was either incompetent or naïve.

Alarms from the border

Alarms from the border (KOR)

Off guard for three hours