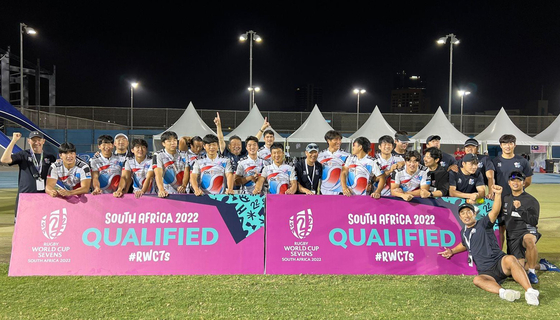 
Korea ended the 2021 Asia Rugby Sevens in second place, losing 33-7 to Hong Kong in the final on Saturday.

The Korean squad was drawn in Group A for the eight-team tournament in Dubai, alongside Hong Kong, the Philippines and Malaysia. Korea swept the Philippines 46-0 and beat Malaysia 40-7, losing only the group game to Hong Kong 14-7, to advance to the knockout stage in second place.

In the semifinals, Korea took on Group B winners Japan, beating them 21-14 to advance to the final. Japan went on to beat China in the third/fourth playoff to take third place.

As well as taking a silver medal at the Asian tournament, Korea's success at the series also earned them a spot in the 2022 Rugby Sevens World Cup, marking the first time the Korean side has qualified for the global tournament since 2005.

Rugby sevens is one of the three forms of rugby, alongside rugby union — as seen in the Rugby World Cup — and the less common rugby league. Sevens is a scaled-down form of rugby union and is played on the same size field, but with much faster gameplay.

Tries, conversions and penalties are scored in the same way as rugby union, and, like every other form of the game, sevens is a full-contact sport.

Korea, hardly a rugby powerhouse, is seeing a slow rise in the prominence of the sport, spurred by the team's qualification for the 2020 Tokyo Olympics. Although Korea failed to make any impact on that tournament, its inclusion still marked a new chapter for the sport here.